"You're History" was released as the second single from Shakespears Sister's debut album Sacred Heart, and was the first and only single to break into the UK Top 40 during the 1980s. The duo had to wait until 1992 for another hit, when "Stay" reached No.1.
Shakespears Sister was a solo project by ex-Bananarama member Siobhan Fahey (who left the band in 1988) when the first single, a double-A side "Break My Heart / Heroine", was released. Fahey's then-husband, David A. Stewart from Eurythmics, suggested she got together with Marcy Levy, who had been involved with the songwriting, and she changed her name to Marcella Detroit. 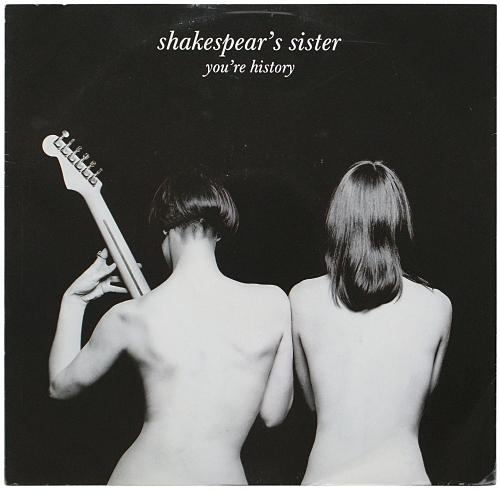 Early pressings of "You're History" featured only Siobhan Fahey. The majority of pressings featured the duo naked with their backs turned to the camera.
The single entered the UK singles chart at No.52 on 23rd July 1989, during the same week Bros were a new entry at No.2 with "Too Much". "You're History" reached No.7 for one week on 13th August, while Jive Bunny was at No.1 with "Swing The Mood".
The B-side on the 7" vinyl and 3" CD single was "Dirty Mind (Live in Leningrad)".
The video was directed by Sophie Muller, who had worked on the videos for the previous double-A side singles. She went on to work with many major artists including Beyonce, Coldplay, Sade, Radiohead, Blur and Annie Lennox.
The video starts with Detroit singing the opening lines in front of a stage curtain. The curtain opens to reveal sparkly backdrops which includes a drummer in a glittery jacket playing sparkling drums. During a close-up of Fahey's face, we also see her son, Sam, dressed in a bee costume. The duo also perform in front of four female ballet dancers dressed in white. There are also vaudeville style dancers and a juggler.

Lyrics for You're History

This clip features a performance on Top Of The Pops on 10th August 1989. Bruno Brookes & Sybil Ruscoe were the hosts. 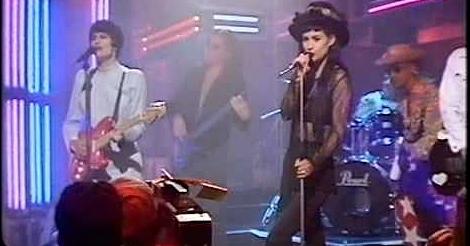