SHOULDER PADS IN THE 80S

During the 80s, power-dressing was used by the increasing number of working women to give them an authoratitive look in an environment dominated by men. The style was mainly achieved by the use of shoulder pads which were used in suits, dresses and jackets to give a broader look to the shoulders.

However, shoulder pads first became popular back in the 1930s with the fashion desinger Elsa Schiaparelli incorporating them in her 1931 designs. There are even earlier examples of broadening the shoulders with the use of puffed sleeves in the 1890s, and these also became popular again during the 1980s. 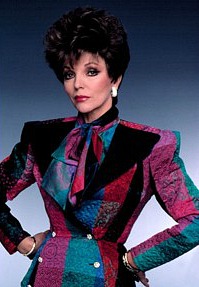 Joan Collins as Alexis Carrington in Dynasty.
During the eighties, jackets were used by women to defeminise their top half, whilst paradoxically the use of knee-length skirts, ostentatious jewellery and scarves accentuated their femininity.

Power dressing became very much a phenomenon, and in the UK Prime Minister Margaret Thatcher (she often wore a skirt suit with wide shoulder, a pussy-bow blouse and an Asprey handbag) and Princess Diana were leading the way. Indeed, the style was very conservative. In the U.S., the style was used heavily by women in the soap Dynasty. 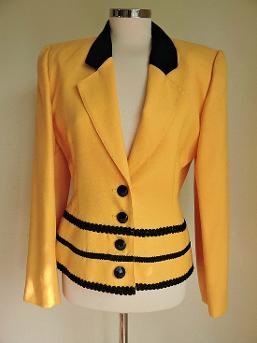 An original 1980s yellow pure wool jacket by Mansfield with padded shoulders.
It wasn't only the women who were using shoulder pads. Adam Ant used them in the 16th century swashbuckling style jacket he wore on the album sleeve for the album Prince Charming.

A resurgence in the use of shoulder pads took place in 2009 after Lady Gaga (who's fashion styles are influenced by the 80s) started wearing them.

You can see more pictures on the 80s Fashion page. 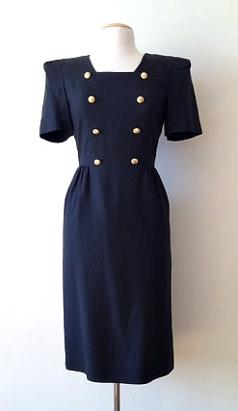 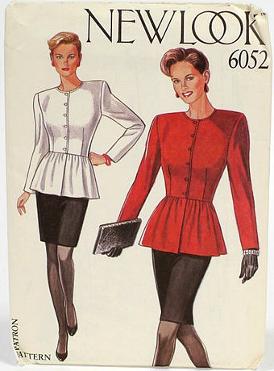