Well, this is definitely in my top ten of the most addictive games. Sim City was the game that put Will Wright's name on the map, and 11 years later, he went on to create an even more popular game, The Sims.

Personally, I prefer Sim City as it requires more attention to detail from the player. Not only do you have to build your city, but you also have to look after the economics, too. It was actually quite a complex game, but still easy to grasp so just about anyone could play.

Unlike The Sims, this was a game that was aimed at and played by mostly males. I suppose I'm at risk of sounding sexist here, but at the time there were nowhere near as many females playing video games as there are now, and The Sims deals with the more social aspect of living in a town or city - girls are experts at dealing with that - whilst Sim City dealt more with building and running your city.

This was one of the first sim games (Populous was also released the same year) and inspired many that followed it. For me, the greatest enjoyment came from the sandbox mode, something that was extremely unique in the 1980's. You could start with a blank canvas (or a partly-built one) and mess around to your heart's content, without worrying about time limits or scenarios. You could also unleash natural disasters on your city, which was great fun in a computer game as nobody actually gets hurt!

I enjoyed the game so much that I bought it again for my PC around eight years ago. It's one of those games that you find yourself going back to time and time again. A true classic. In fact, I think I might go and have another play at it right now!

Boxed game for the Amiga by Infogrames/Maxis 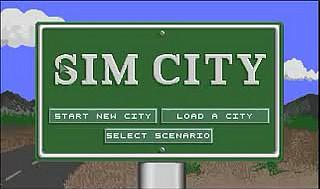 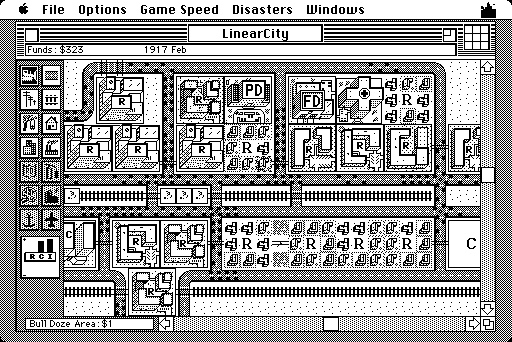 Sim City on Apple System 6.0. The game was in monochrome on the Apple Mac but the interface was very similar to other colour versions. 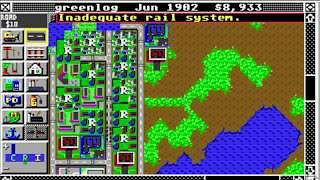