It was exciting to hear that Kerr & co. were releasing their first new album in five years in November 2014. You can listen to the teaser video Blindfolded and single Honest Town on this page, and it would appear that the band have been experimenting with a new sound.

Funnily enough, when I heard the opening to Blindfolded I thought I was watching a Youtube ad, before it slowly dawned on me that this was actually the band's video! This is an impressive sound indeed - you can watch the video for yourself at the top of this page.
Simple Minds - Big Music 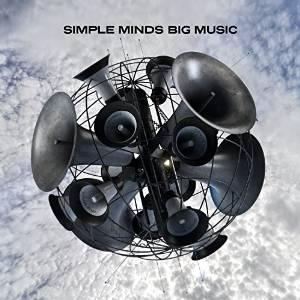 The album still manages to retain the distinguished, epic guitar sounds of the band that we all grew up with, and mix them with modern production techniques and lush synth sounds that are reminiscent of the band's earlier albums, although with a bigger sound. The songwriting is back on form, too, with melodic and memorable tunes which have been lacking somewhat on recent albums. This is the Minds' best album in many a year, and the band will be pleased with the No.12 position in the UK album charts that it thoroughly deserved.
Big Music - Track Listing

Those bonus tracks sound pretty interesting. There's a new version of Swimming Towards the Sun, a track which originally appeared on the Our Secrets are the Same CD in the Silver Box box-set in 2004.

Included is the band's cover of Riders On The Storm which was a hit for The Doors in 1971 and featured on their album L.A. Woman. This is followed by a cover of the rock song Dancing Barefoot which was released as a single in 1979 by the Patti Smith Group.

This is the lead single from Big Town and don't be surprised if you believe you're watching a Jean Michel Jarre video to begin with, at least. It sounds like Simple Minds have renewed energy with a refreshing, electronic sound that is very welcome indeed.