SIMPLE MINDS "PROMISED YOU A MIRACLE"

This was the first single from New Gold Dream (81-82-83-84) and the first for the band to reach the UK Top 20, making it their breakthrough single in several countries, including the UK, New Zealand, Sweden and Ireland. The song remained on the UK singles chart for 11 weeks.
Indeed, this was the start of a substantial period of chart success for Simple Minds which lasted until 1998, when "Glitterball" became the last single to reach the UK Top 40, peaking at #18. However, the band's last three studio albums (not the singles) have all been a commercial success, reaching the UK Top 20. 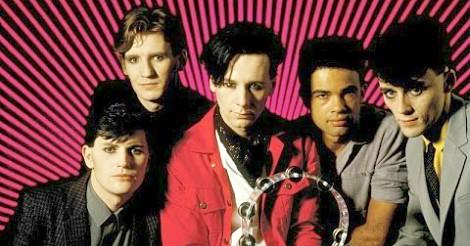 With its vibrant melody and funky bass line, "Promised You A Miracle" is one of the band's finest singles, and it was the only track from New Gold Dream to feature Kenny Hyslop as a session drummer.
Many fans believe that this was the band's finest album, bridging the gap between their new wave electronic sound and their stadium pop/rock sound. Producer Peter Walsh can be given some of the credit for this, creating a less dark, more polished radio-friendly sound. Combine this with Jim Kerr's eyeliner and hair style, it's no wonder that many consider the band to be part of the 80s New Romantic era, although labelling them as such is controversial. 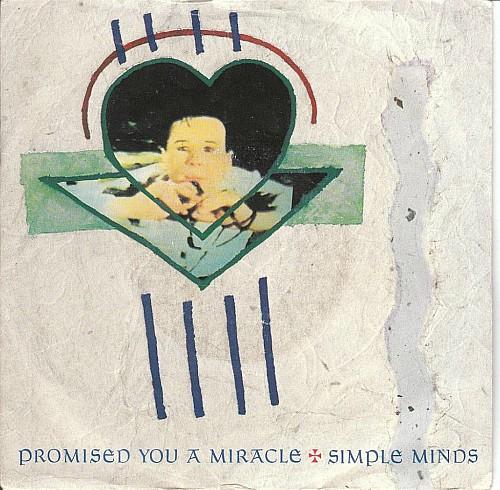 "Theme For Great Cities" (5:50) was included as the B-side on both the 7 inch and 12 inch vinyl singles. A third track "Seeing Out The Angel (Instrumental)" (6:32) was included on the 12 inch.
The single has been released three times, with a live version in 1987 (which reached #19 in the UK) to promote the album Live in the City of Light, and a stunning acoustic version in 2016 (which did not chart) from the album Acoustic.
The original version entered the UK single chart on 4th April 1982, while Goombay Dance Band were at No.1 with "Seven Tears". The single reached its peak position of #13 for one week on 9th May. By this time, Nicole was at No.1 with "A Little Peace".

Lyrics for Promised You A Miracle

The video is an arty affair which focuses on the band playing their instruments, and also a blonde-haired woman wearing heavy make-up. We see several close-ups of her face. She can also be seen wearing a tweed suit and hat and placing her luggage onto a conveyor belt. Later on, she is lying on the floor in her swimsuit, partly on a fake beach. All of the footage was shot inside a studio, with fake backgrounds including the beach and a TV test screen.