SINITTA - "Right Back Where We Started From"

Originally a No.8 hit for Maxine Nightingale in november 1975, Sinitta's cover became her sixth single to enter the UK Top 40, and actually charted higher than the original, although didn't sell as many copies.
The track was released as the second single from Sinitta's second studio album Wicked, entering the UK singles chart at #19 on 28th May 1989, and reaching a peak position of #4 on 11th June 1989, where it remained for two weeks. During this time, fellow PWL singer Jason Donovan was at #1 with Sealed With A Kiss, followed by Soul II Soul with Back To Life (However Do You Want Me). 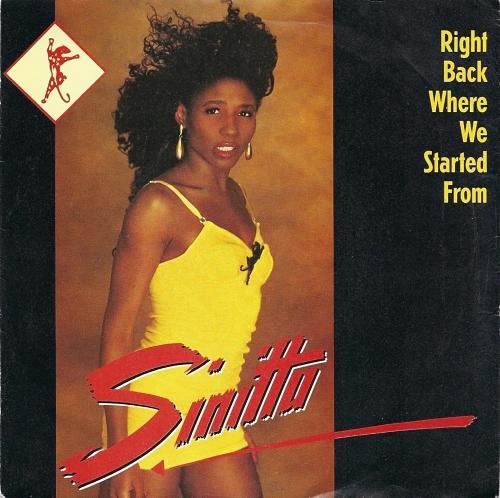 "Right Back Where We Started From" was penned by Pierre Tubbs and J. Vincent Edwards. Sinitta's version was produced by Peter Hammond for PWL and featured as track 1 on the Wicked album. Unlike her self-titled debut album where four tracks were produced by Stock, Aitken & Waterman, only one track was produced by the trio on her second album, although Sinitta did not write or produce any of the songs. Two songs that were produced by S/A/W and recorded by Sinitta were not used on the album, as the singer wanted to move away from working with them. However, the album was not a major success, peaking at only #52 on the UK album charts.
Sinitta released a further three singles from the album; "Love on a Mountain Top" (#20), "Lay Me Down Easy" (#88) and "Hitchin' a Ride" (#24). The lead single from the album was "I Don't Believe in Miracles" which reached #22.
In the video, we see Sinitta dancing around on a fake beach in a bikini top and mini skirt. There are also a couple of guys, one of which plays the sax solo, although he may not be the actual sax player and just a model. There are also another two girls and two children. Three washing lines full of red, yellow and orange towels, a tyre on a rope and an old car also feature for whatever reason! It's all a bit nonsensical with no storyline, lots of cheery colours and everyone dancing around pretending to have fun.
Sinitta's biggest hit was "So Macho", which reached No.2 in August 1986. 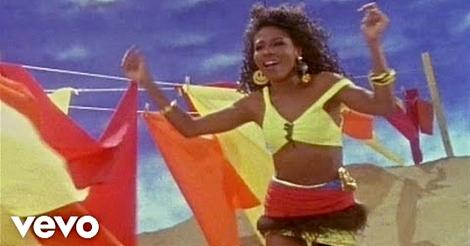