As I write, it was 37 years ago when the 8-bit arcade adventure game Skool Daze was released, which makes me feel very old indeed. It was released in 1984 on cassette by Micropshere, and priced at £5.99 - this was the year I actually left school! Thankfully, my memory is still in good working order and I certainly remember playing the video game on my friend's ZX Spectrum.
The ZX Spectrum game received high praise from the majority of the computer game critics of the time. A conversion was also released for the Commodore 64, and you can see a screenshot of this and a photo of the cassette itself further down the page.
The game was later released in 1987 by Alternative Software Ltd. for just £2.99. 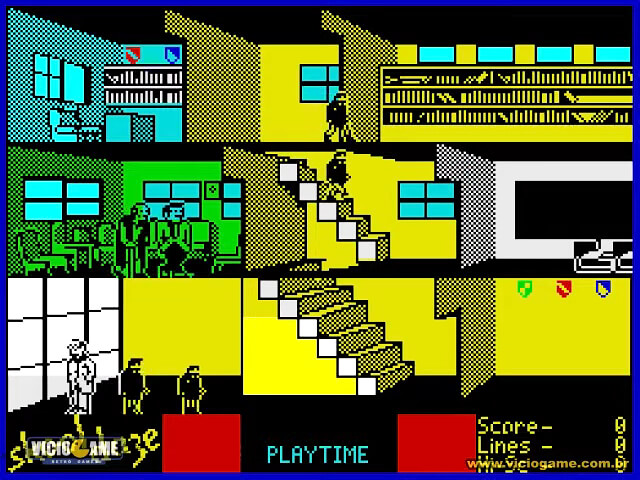 Whilst the graphics and sound were nothing to write home about (the Speccy's bleepy rendition of Pop Goes The Weazel was even more grating than scaping your fingernails down a school blackboard!), it was the original and innovative gameplay that caught the critics attention. Indeed, this was one of the first sandbox games, which allowed an unrivalled amount of freedom for the player. The game also inspired Rockstar's 2006 Playstation 2 game Bully.

Initially, this new concept left many players scratching their heads and unsure of what they were actually supposed to be doing. However, once you had grasped the concept of the game by actually making the effort the read the instructions, you quickly discovered that it was a thoroughly enjoyable game. It was also very refreshing not to have to stick to rigid, set out gameplay which would often send you back to the start of a level (or sometimes the entire game) after a wrong move.

However, you are not entirely free to simply cause mayhem, and as in real life, there are consequences for unruly behaviour. For instance, if you couldn't be bothered to turn up for class, then you will find yourself writing lines as a punishment. Sling-shotting a projectile at a teacher will also see a punishment, even if you are not the culprit and you are simply standing near someone who actually is the gulity party.

You also receive lines for sitting on the floor, even though the reason could be because the classroom is full and there are not enough desks to sit at, which leads to poor Eric being shoved out of his seat and forced onto the dirty floor. This actually becomes pretty annoying, and this "feature" is actually believed to be a bug in the game, as it was ironed out in the sequel Back To Skool. Once you have received 10,000 lines then you are expelled from the school! 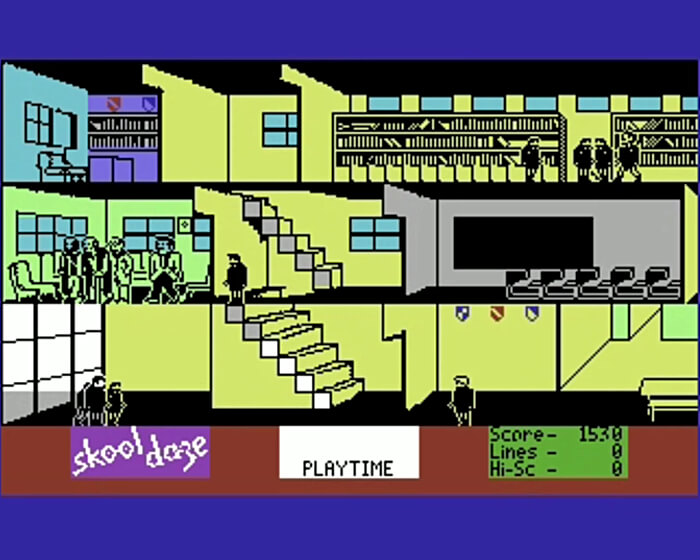 The gameplay itself is set on a sideways scrolling screen with three levels. All of the other characters in the games are controlled entirely by the CPU, so there was some pretty nifty programming involved to make the game run smoothly.

There is an objective to the game, and simply wandering around all day launching projectiles and bullying other kids isn't going to get you very far. You play the role of a schoolboy named Eric, and your main task is to steal your report card from the Headmaster's safe in the staff room, before he sees just how bad it is! To do this, you will need to complete other tasks in the school, which includes hitting 15 shields with your catapult slingshot.

Your next task is to knock over the four teachers, who each reveal a letter for a password. The old history teacher won't reveal his letter until you discover his date of birth (which is different each time you play the game), and you need to chalk it on the blackboard before he enters the classroom. When the history teacher sees it, he then gives you his letter.
Now you must chalk the letters in the right order on the blackboard. You then go back to the safe and jump up to try and open it. If it doesn't open, you have the wrong password. After you have successfully opened the safe you are still not high and dry. Now you need to hit all of the shields again to stop them flashing. Once this is done you have completed the game - well done!
There are four amusingly named teachers in Skool Daze. These are the Headmaster, Mr. Wacker, history teacher, Mr. Creak, science teacher, Mr. Rockitt, and geography teacher, Mr. Whithit. Although there are plenty of unamed pupils within the game, the three lead characters are Boy Wander (the tearaway), Einstein (the Swot) and Angelface (the bully). 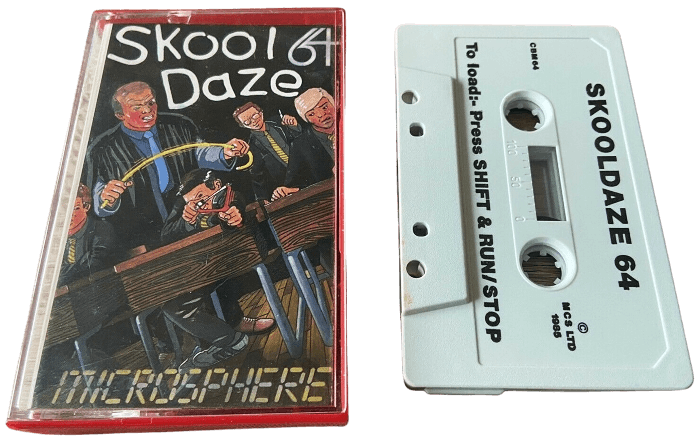 The game was created by David Reidy, Helen Reidy and Keith Warrington. David gained his inspiration from the book Just William and the Beano comic strip The Bash Street Kids. He also used memories of what he used to get up to between lessons. He was responsible for coding the game, and his hand-written code was typed into the computer by Helen, who was also a teacher. After deciding he was no artist, David roped in a family friend, Keith Warrington, to create the graphics - he was studying graphic design at the time.

Whilst the original ZX Spectrum version gained high scores from the critics, the later C64 version looked very much like a straight port of the ZX Spectrum conversion, with the graphics having a very similar, if somewhat paler style, despite the machine's superior capabilities. Points were deducted by many reviewers for this, but it still, nonethless, received very favourable feedback. The Commodore's rendition of Pop Goes The Weazel was also slightly less irritating to the ears.
The Guardian newspaper included Skool Daze in their list of 30 Greatest British Video Game Ever.
Your Sinclair magazine rated the game 8/10.
General ratings were between 80-90%, and certainly helped the game to become a commercial success, although wasn't promoted as well as it could have been and was also a victim of piracy.
You can purchase an updated version of the game entitled Skool Daze Reskooled for the PC and Mac. 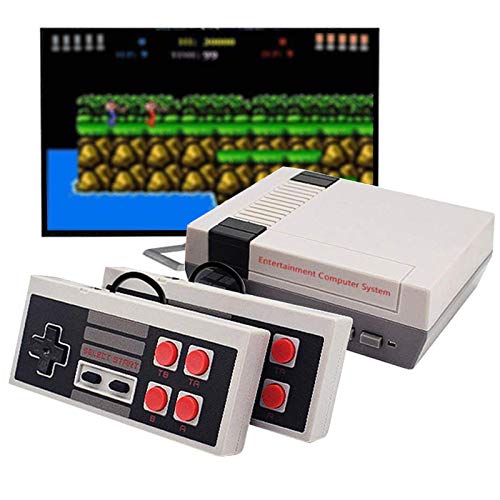