Smith's Crispy Tubes were pretty similar to KP Wheat Crunchies in shape (the latter are still being produced), but with a more delicate texture. Sadly, production ended soon after the Smith's brand was sold to Walker's in 1993, although other favourites such as Salt 'N' Shake, Bacon Fries and Scampi Fries are still availabale today under the Smith's banner.
You may remember the Tube Mania TV advert (above) which features "some bozos" eating any kind of tube, including an exhaust pipe and a tube of toothpaste, and also a policeman eating his truncheon - TV ads were deifintely a lot more fun to watch back in the 80s! 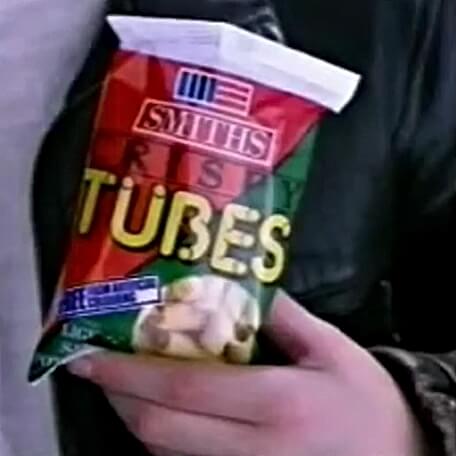 As well as the standard lightly salted flavour (which came in a green and red bag), salt "n" vinegar flavour also later introduced which came in blue bags. These had a similar diagonal stripe down the front with light blue and dark blue on either side. In 1985, a Mexican spice flavour was also launched, and these came in an orange bag with the same design layout. All of the bags had a circular, transparent window allowing you to actually view some of the product. This was actually commonplace back then, and I remember most brands having a clear window, including Walker's and Golden Wonder.
The bags were filled with a generous helping of crispy tubes. These days, when you open a packet of potato crisps, over half of them are missing! In fact, some crisp packets are filled with up to 72% air, and the excuse is that they are filled with nitogen gas which helps keep the product fresh. However, that doesn't wash with me, and I certainly don't remember the crisps going stale when the bags were filled more generously.
This is the first TV ad which features an actor playing the role of John McEnroe. After shouting his infamous "You cannot be serious" line, the umpire calms him down by offering him a crispy tube.