Firstly, I have a question for you! Are Space Raiders crisps or a corn snack?
Well, here's my answer. Although they are officially a "corn (maize) and wheat snack", interestingly, the term "Space Raiders crisps" is searched for by around 4,400 people per month here in the UK, which is why I've used it as a heading.
Crisps are officially made from potato, but the public thinks differently - only around 90 people per month use the word "snack" in their search. However, Space Raiders do contain a small amount of dried potato, so I would argue that they are a crisp, and they certainly have a pretty crispy texture when you bite into them. But hey, who the hell cares, what matters most is that us Brits still love them, and they appear to be as popular as ever! 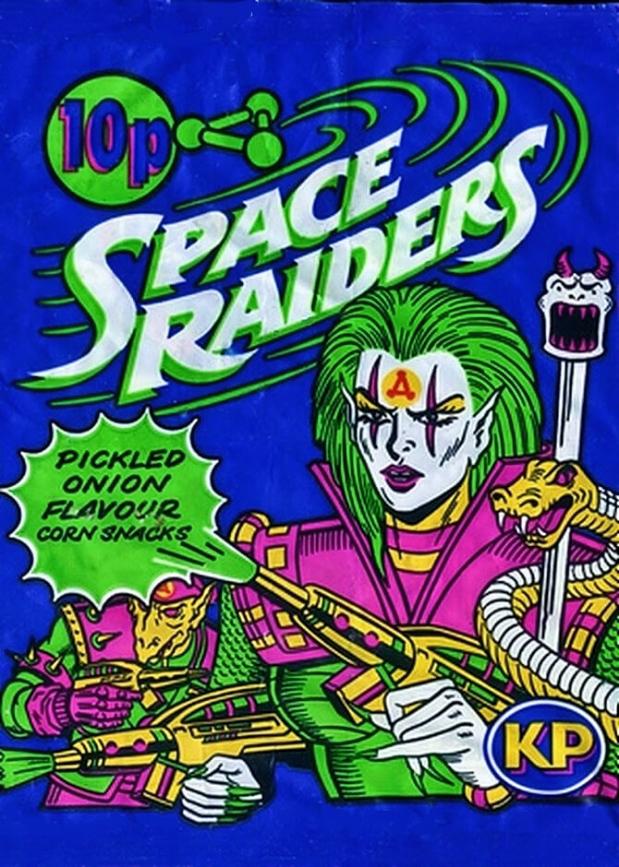 Produced by the well-know British food brand KP Snacks, Space Raiders first appeared in the shops in 1987, and were priced at just 10p per bag - in my head I was eating them long before this, but apparently not! The snack soon gained a big following, and is on eof the best-remembered 80s food snacks. Unbelievably, the bargain 10p price remained throughout the 1990s until 2007, with the price increasing to 15p in October of that year.
Each alien-shaped "crisp" was (and still is) shaped like an alien and, as already mentioned, is made mainly from maize and wheat. There are obviously many other ingredients such as sunflower oil, salt and other flavourings etc, and you can view the full list of these at the bottom of this page. 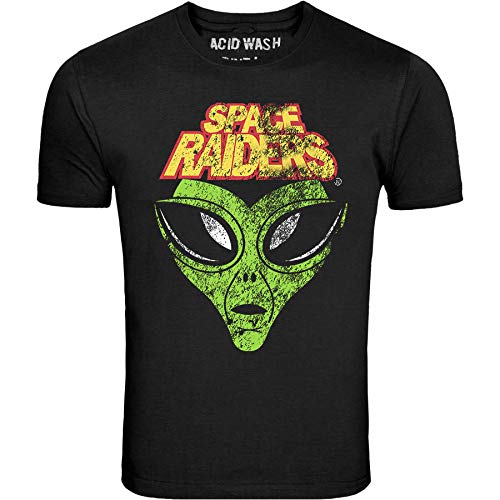 The 80s and 90s packets featured Astra and her Space Pirates, with a vertical mini comic strip on the back. Sadly, the comic strips were removed during 2010 - boo!

You can watch the launch advert above, which first aired on ITV back in 1987. It features two schoolboys, who are on a school trip in some kind of Victorian engineering museum and totally uninterested in what their teacher is saying, just like I was back in the day!
However, they are totally interested in a bag of Space Raiders! While they mock the story of Astra and the Space Pirates, which is printed on the back of the bag, the cartoon characters suddenly appear and accidentally fire at a water valve, which opens up and soaks their teacher in the face - nice one!

Information about the snack in noughties (the 2000-2009 period) is pretty non-existent.
In line with many other snacks, a new foil pack (and new flavours) were introduced in 2010 to increase shelf life, with the price increasing to 20p per pack.
The price increased further to 30p per bag in 2019, although the pack size increased to 25g, with KP making this very clear with the banner "New Bigger Pack!" to justify the price rise.
In 2021, the front of the packet features an alien head with huge eyes and a menacing look. Each head is a different colour and slightly different shape for each flavour. Beef (red) and pickled onion (green) remain the most popular flavours, but you also buy spicey (orange) and saucy BBQ (purple).
Early in 2021, Iceland supermarket launched a new Space Raiders frozen potato snack (which are basically alien-shaped chips) you cook in the oven on a baking tray. Must give those a try!

The flavour that everyone seems to remember the most is pickled onion. It was certainly my favourite, although statistics show that slightly more people are actually searching for the beef flavoured ones in 2021. The saucy barbecue flavour launched in 2010, and there is currently a spice flavour although I have been unable to find out when this one launched. There have also been cheese and salt and vinegar flavours, but these were discontinued. 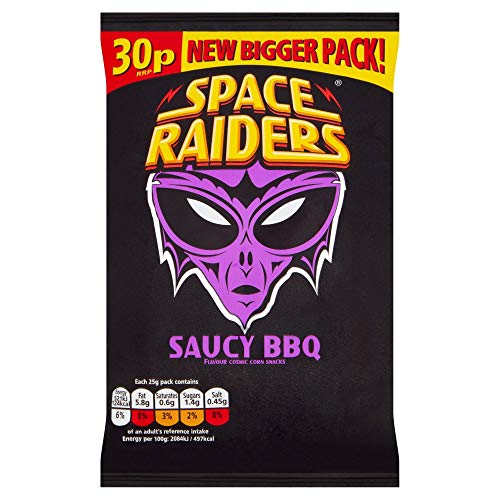