THE CHICKEN SONG BY SPITTING IMAGE 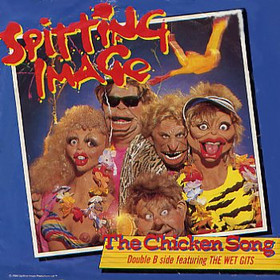 The Chicken Song was a deliberately irritating 80s novelty song that reached #1 for three very long weeks from 17th May 1986, after it knocked Falco's Rock Me Amadeus off the top spot.

The song was actually a parody of 80s summer hits by Black Lace (such as Agadoo and Conga) with one line in the lyrics referring to them as "those two wet gits with the girly, curly hair".

The Chicken Song was pushed off the #1 spot by Doctor and The Medics with their version of Spirit In The Sky.

For those of you not from the UK, or simply not old enough to remember it, Spitting Image was a satirical puppet show which took the "michael" out of famous celebrities, politicians and the British royal family. Margaret Thatcher and Ronald Reagan were two of the most memorable characters that featured in the show.

Amongst those who provided voices for the puppets were Chris Barrie (who is now best remembered for his role as Rimmer in Red Dwarf) and comedian Harry Enfield.

Nellie The Elephant - The Toy Dolls

The Timelords - Doctorin' The Tardis