Stan Ridgway is a Californian musician who failed to score a hit in his own country, with his only charting album The Big Heat stalling at No.131 in the U.S. "Camouflage" was a one hit wonder in the UK and across Europe, entering the UK singles chart at No.57 on 29th June 1986. The song reached a peak position of No.4 on 3rd August (for one week), in the same week that Chris De Burgh was at No.1 with "The Lady in Red".
"Camouflage" featured a 60s Spaghetti Western sound and was lifted from Stan Ridgway's debut album The Big Heat, which failed to chart in the UK album charts, although it did reach No.13 on the Indie Chart. The B-side featured the track "Rio Greyhound", which later featured as a bonus track on the CD version of the album. 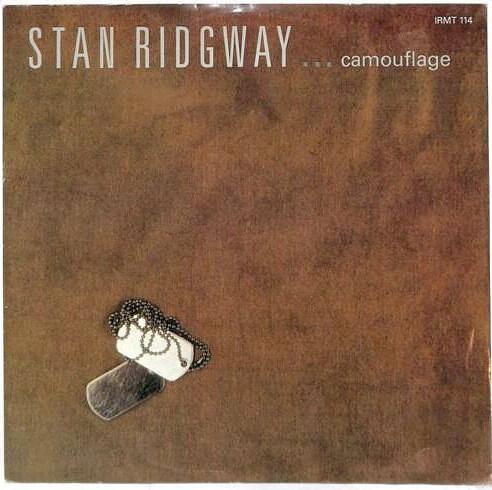 The lyrics are about a PFC in the United States Marine Corps who is fighting in the Vietnam War during 1965. He becomes isolated from his patrol, until a "big marine" nicknamed Camouflage comes to his rescue - "The boys just call me camouflage".
Given that the song is an American story, and that the lyrics contain several americanims such as "huntin' Charlie down" (which refers to the communist forces), it's surprising that it was not a hit in America. Indeed, I believe the Americans only really remember the hit "Mexican Radio" from his time with the band Wall of Voodoo. "Camouflage" was an unexpected hit in the UK, and there was certainly nothing else quite like it in the charts of 1986.
I like the song, but never bought the single. Actually, I never bought a great deal of singles unless I really wanted the 12 inch. Instead, I bought the latest Now That's What I Call Music album, and I remember "Camouflage" being on my vinyl version of Now 7 - the one with the cream-coloured sleeve. It was played regularly on my budget-priced Amstrad tower system.
The video is a pretty straightforward affair, and focuses almost purely on Ridgway and his band performing the song under colourful lighting. There are several brief black and white flashbacks to the Vietnam war. To be honest, I don't actually remember ever seeing the video in the 80s, and that's not because I was high on acid - Ridgway would usually perform the song on Top Of The Pops and other music shows of the time.
Other tracks released from The Big Heat as singles were the title track, "Drive She Said", and "Walkin' Home Alone".
Before venturing on a solo career, Ridgway was in the band Wall of Voodoo, which he founded in 1977.