Status Quo "What You're Proposin'"

Released on 3rd October 1980, "What You're Proposing" was the lead single from Status Quo's thirteenth studio album Just Supposin'. The song was penned by frontman Francis Rossi and Bernie Frost, and was produced by John Eden.
The song is my second favourite Quo single (my favourite is "Down Down"), and I particularly like the drumming on this one. 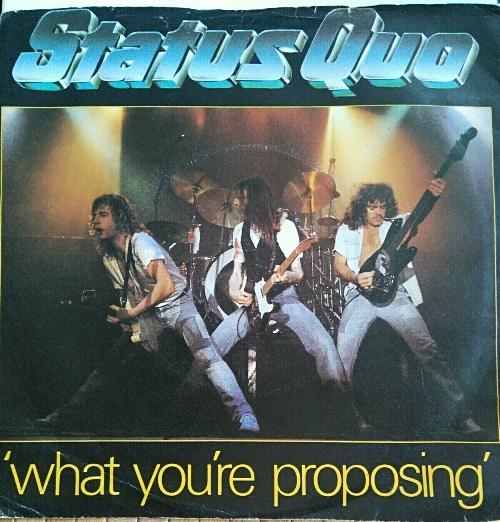 The B-side is an instrumental jam recorded in the studio, which was a brand new, non-album track written by Rossi, Parfitt, Lancaster, Coghlan and Bown. However, the song is included on later releases of the album.
A limited edition 7 inch vinyl single with colour picture sleeve was produced for the first pressing of 75,000 copies. A 12 inch single was not released.

The single was a big hit across Europe, reaching No.2 in Ireland and Switzerland, No.3 in Germany and Sweden, No.4 in Norway and The Netherlands, and No.7 in Belgium.
In the UK, the single entered the official chart at No. 27 on 5th October 1980, reaching No.2 on 26th and pushing "D.I.S.C.O." by Ottawan down to No.3. It was held off the top spot for two weeks by Barbra Streisand's "Woman in Love", before falling back to No.5 on 9th November.

What are the lyrics about?

According to a page about "What You're Proposing" on Songfacts.com, the lyrics are about a married woman who once offered herself to Francis Rossi, and although he never accepted the offer, he amusingly stated in an interview with them "I wish I'd gone there".

The second single from Just Supposin' was released in November 1980 as a double-A in the UK only. "Lies"/"Don't Drive My Car" reached No.11. "Rock 'N Roll" was released as the third and final single, although not until almost a year later in November 1981, reaching No.8.

In The Army Now Album Review