Now this is a movie that I remember had me in stitches after seeing it for the first time on TV sometime in the 1980s. However, as I was a teenager at the time, I have recently watched the film again to see how it holds up, and I wasn't to be disappointed.
Despite some mixed reviews, Stir Crazy was hugely successful, raking in over $101 million at the box office, and becoming the third highest grossing film of 1980.

The film's two main stars were Gene Wilder (who played Skip Donahue) and Richard Pryor (as Harry Monroe), although this wasn't the first movie in which the pair worked together. They had previously starred in the widely praised, 1976 comedy thriller Silver Streak, and they would reunite again at the end of the 1980s for the hilarious, but politically incorrect comedy See No Evil, Here No Evil. The duo reunited for the final time in 1991 for the film Another You, which was panned by the critics and became a major box office flop - it was pretty dire.

The plot of Stir Crazy revolves around two unfortunate friends who are framed for a bank robbery. Skip and Harry are fired from their jobs in New York on the same day, and so decide to head for Hollywood to seek fame and fortune. En route, their van breaks down and they are forced to take on some very odd jobs to earn some cash to get the van repaired, and also avoid starving to death!
In Arizona, the pair are hired to promote a bank, and soon find themselves dressed as woodpeckers and performing a song and dance routine. While taking a break, two criminals steal their costumes and use them to disguise themselves during a bank robbery. Skip and Harry are arrested, and a hurried trial results in a 125 year prison sentence for each of them. They are advised by a court-appointed lawyer to be patient and wait until he can appeal their case.
As you can imagine, life inside a maximum security jail is no easy ride, so they attempt to fake insanity but fail dismally. The pair befriend a bank robber called Jesus Ramirez and Rory Schultebrand, a gay man who killed his stepdad. They meet many other unsavoury characters including an axe murderer named Blade, and mass murderer Grossberger. 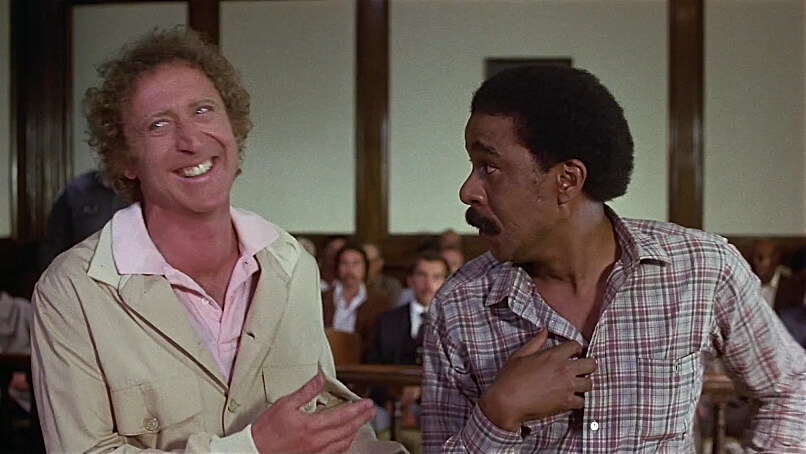 To the annoyance of Harry and the wardens, Skip appears to be enjoying the whole experience, and even several days spent in the solitary confinement of a small, dark box has a positive effect on him, and he begs the guards for another day inside!
After spending three long months inside, Skip and Harry are called to the Warden's office and are ordered to ride a mechanical bull. Surprisingly, Skip appears to have a natural talent and rides the bull at full speed without falling off. Warden Beatty decides to enter him into the prison's annual rodeo competition.
It turns out that the rodeo is actually a crooked operation run by Beatty and a head warden from another prison. The money made from the rodeo is lining the warden's pockets instead of going to the inmates. Jesus and Rory hatch an escape plan which involves Skip deliberately refusing to engage in the competition. However, the plan recoils and guard Wilson is ordered to "straighten Skip out".
Both Skip and Harry are mishandled by the wardens, but Skip's baffling enjoyment of his experience continues. After the guards suspend him from the floor of a cell with manacles, this only results in fixing Skip's bad back which he had obtained from riding the bucking bronco.
The pair are visited by lawyer Garber and his female cousin, Meredith, who Skip instantly finds rather attractive. They set out a plan to prove their innocence. In the meantime, Skip and Warden Beatty make a deal. To take part in the Rodeo, Skip demands that he has his own crew and a larger cell. Beatty agrees, but orders his head warden Wilson to send a guard to keep an eye on them. Wilson reveals to the guard that Skip will not be leaving the rodeo with his life intact.
During rodeo practice sessions, Skip and his crew (Harry, Rory, Jesus and Grossberger) amass the tools required for an escape. They use the metalwork store to reconstruct the tools into seemingly everyday items.
Meredith finds a job as a waitress at a strip club. She uses this as a cover in order to search for the suspects, and encounters the real bank robbers. She calls the police and Garber.
During the rodeo, attempts to kill Skip fail. Skip's team escape through a secret opening through the air ducts. Some of the gang enter a restroom where Jesus' wife is waiting with their disguises. The others meet Jesus' brother who has a hollow pushcart to hide in. The gang dress in their disguises and re-enter the rodeo grounds.
Rodeo champion Caesar Geronimo is set to compete against Skip, and they are challenged to swipe a bag of cash (the warden's sidebet) from the horn of an imposing, real life bull. Skip suggests to Caesar that he should give the prize to the inmates, and offers to let him win if he does so. Caesar wins and throws the bag to the prisoners.
Skip heads to the secret opening, but before he can escape, one of the inmates, contrabandist Jack Graham, shows up and becomes suspicious. Grossberger knocks him unconscious and Skip makes his escape to the pushcart. The group drives off to a secret meeting spot.
Rory and Jesus say their goodbye's to Skip and Harry and drive off to Mexico. Skip and Harry get into another car, but are stopped by Garber and Meredith who inform them that the cops have captured the real burglars. Harry and Skip decide to head for Hollywood (as originally planned) and Skip persuades Meredith to join them.
Mark's rating: This is zany, enjoyable fun with a great on screen chemistry between Wilder and Pryor. Despite now being well into my 50s, I still found many of the comedy scenes hilarious. The pair are terrific comedy actors, and although the plot eventually runs out of steam, with the comedy being replaced by tension, there are plenty of real laugh out loud moments. The duo's survival strategies are amusing, as are their diverse characters. If you're a fan of top notch slapstick fun then you'll find this a barrel of laughs. However, if you find slapstick old-fashioned and puerile, then you may want to avoid this one. 8/10
Director: Sir Sidney Poitier
Producer: Hannah Weinstein
Written by: Bruce Jay Friedman
Music by: Tom Scott
Distribution: Columbia Pictures
Release date: 12th Dec 1980
Budget: $10 million
Box office takings: $101,300,000