Super Cobra is basically Scramble with a Helicopter, although, personally, I found it more challenging. The game was made and distributed by Stern in North America during 1981, the same company who also produced Scramble as an arcade coin-op. Super Cobra was released as the sequel just months afterwards, and although it was commercially successful, it wasn't as big a hit or as well remembered as its predecessor.
The sideways scrolling shooter was first released by Konami as an arcade coin-op in Japan. It was ported to many home consoles and home computers by Parker Brothers, including the Atari 2600, 5200 and 8-bit computers, Colecovision, Intellivision, and MSX computers. A cartridge was also released by Entex for their standalone, tabletop game Adventure Vision - only four games were ever released for the machine!
You can play this superb free online version on your computer. Please allow a little time for it to download. Use the arrows to move your helicopter, S key to fire , and X key to drop bombs. Enter is one player and Shift is 2 players.
As with Scramble, the player must carefully navigate over mountains and through a cavern system, which occasionally becomes very tight, whilst also dealing with the enemy. The Cobra is loaded with bombs and a laser which are used to destroy enemy structures, defence rockets, smart bombs, tanks and UFOs. Destroying enemy fuel tanks tops up the players fuel level. The game is fast-paced, and I remember the sound effects were particularly good - in 1981 they sounded pretty awesome!
There are ten levels in the game and a final base level in which the player must grab the booty and carry it away. Losing a life caused the player to return to the beginning of the level they are on. 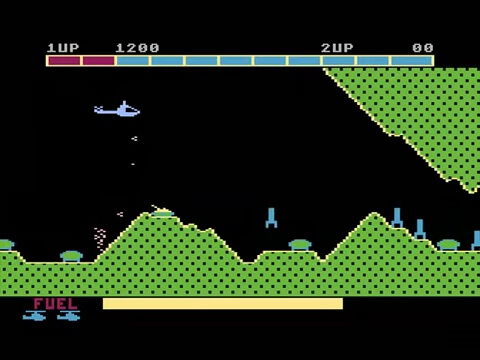 Overall, Super Cobra was a very entertaining and challenging game, with colourful and polished graphics and super sound effects. My only criticisim would be that there was little time for the player to draw breath, with only the briefest intermission before scrolling straight into the next level. You also need to be a really good multi-tasker, maintaining your fuel supply, navigating the terrain, and destroying and dodging the enemy all at once!
In the UK, a tabletop version was released by Grandstand during 1983 under licence from Epoch Co. The Tomytronic version of Super Cobra was highly praised the bi-weekly electronic games newsletter Arcade Express awarding 9/10.
The XL/XE conversion was the best of the bunch, and made full use of the Atari's powerful soundchip. 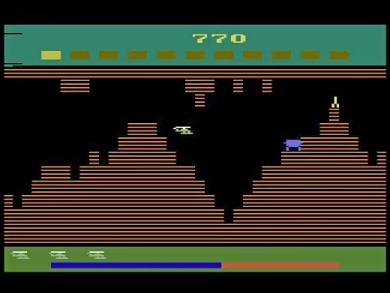 The Atari 2600 version by Parker Bros. was an underwhelming port but did the job. A 2017 homebrew version leaves it in the shade. 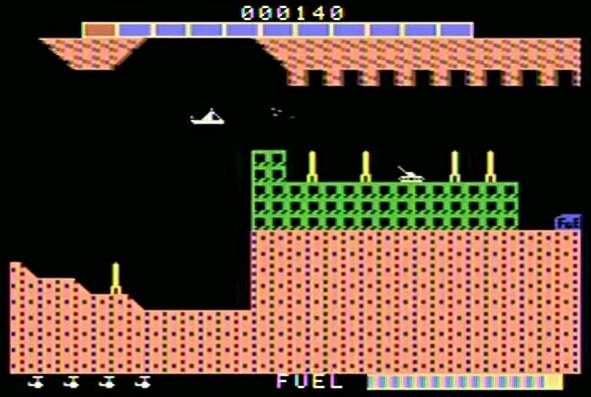 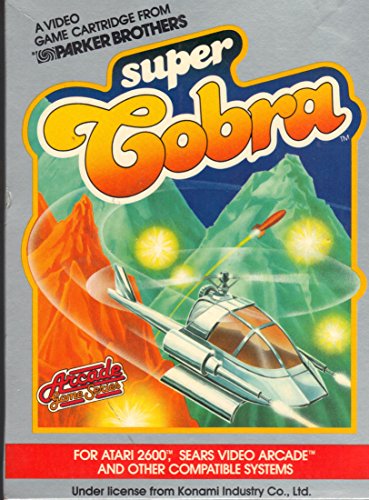 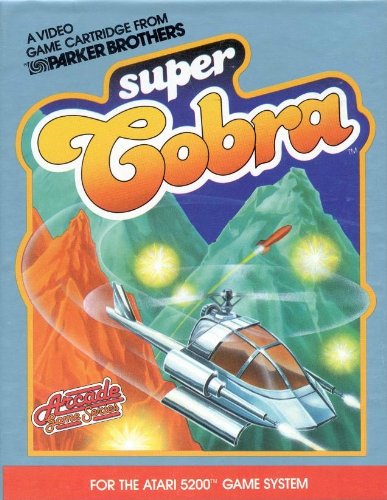