Released in November 1985, Burning Heart reached #2 in the U.S. and #5 in the UK and featured on the Rocky IV soundtrack. With its Cold War inspired lyrics about the battle between East and West, the song was highly suitable for a movie about a boxing match between Rocky (played by Sylvester Stallone) and Ivan Drago (Dolph Lundgren). The movie was written and directed by Stallone himself.

Burning Heart was Survivor's seventh Top 40 hit single in the U.S. and the second and last Top 40 hit in the UK. The single re-entered the UK singles chart at #70 on 26th Jan 1986 (the original release entered the chart for one week) while a-ha were at No.1 with "The Sun Always Shines On TV". By 23rd Feb, the song had reached its peak position of #5 for one week, and by this time, Billy Ocean was at No.1 with "When The Going Gets Tough, The Tough Get Going". 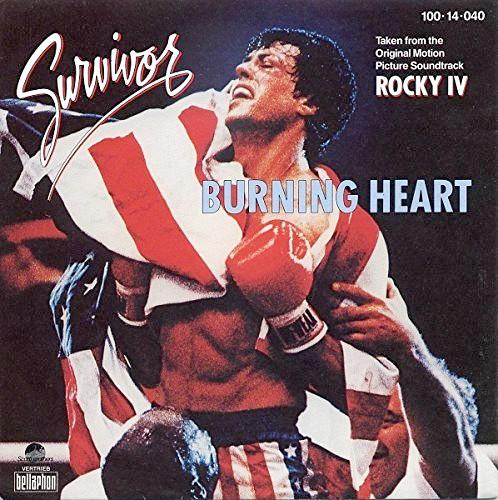 In the U.S., the single was held off the top spot by Dionne Warwick and Friends with "That's What Friends Are For". The single reached #1 in Switzerland and the top 10 in Ireland and many European countries.
The B-side of both the 7" and 12" singles was "Feels Like Love". The 12" maxi single also included "Eye Of The Tiger".
The video is very much what you would expect from an 80s soundtrack song, with footage of the band on stage mixed with scenes from the movie. However, a different version without the movie footage has been rolled out as the official video by Vevo (which you can watch above), but this isn't the version I remember from the 80s.
Survivor's most well-known and most successful song is, of course, Eye Of The Tiger (from the previous movie Rocky III) which spent six weeks at number in the U.S. The song also reached #1 in the UK.
The beret-wearing lead singer of the band's most famous song, Dave Bickler, left the band in late 1983 due to polyps on his vocal chords. He was replaced by Jimi Jamison, who sang on "Burning Heart". He also wrote and performed the theme song to the Baywatch TV series "I'm Always There". Jamison sadly died from a hemorrhagic brain stroke on Sept 1st 2014. 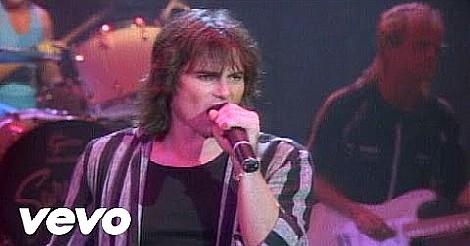