This classic art pop track features a truly insane new wave video that could only have been produced in the 80s. Frontman David Byrne adopted a geeky office worker style (a suit with a bow tie and specs) and performed a rather quirky (actually, it's bizarre!) dance routine, at times looking like an out-of-control Thunderbirds puppet.

The background contains arty imagery such as a fake ocean and multiple clones of Byrne dancing in sync, which were created using the limited video effects that were available back in the day, but very typical of the early eighties.

The Best of Talking Heads

Produced by the legendary ambient music producer Brian Eno, Once In A Lifetime was the band's first hit in the UK, reaching #14, although it stalled at a rather unimpressive #103 in the U.S. despite rave reviews of the song by music critics. The song was also a moderate hit in several other countries, reaching #23 in Australia, #28 in Canada, #16 in Ireland and #24 in the Netherlands. The track was released as the lead single from Talking Heads fourth studio album Remain In Light.

A live version of the song was also released as a single in 1984, peaking at #91 on the Billboard Hot 100, although it didn't chart here in the UK.

Talking Heads would have to wait another four years before breaking into the British Top 40 again, with "Road To Nowhere" reaching #6 in 1985, becoming their biggest ever hit.

I see many reviews of the band suggesting that they never really achieved massive mainstream success. As a singles band they certainly didn't, but with five Gold and two Platinum albums, one could hardly describe the band as unsuccessful. 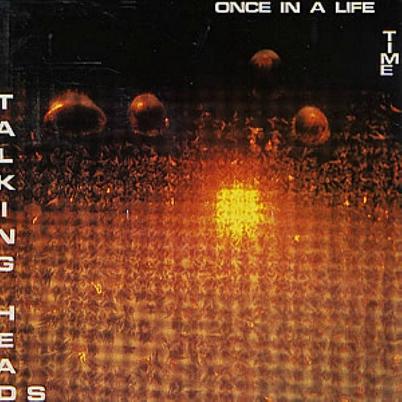