As you will understand, due to its age (87 years old!) the picture quality of The Brave Tin Soldier isn't spectacular, but it's certainly viewable. I really like the innocence of this animation which is set in an old toymaker's workshop.

When the toymaker (who looks like a very thin Santa Claus) has shuffled off to bed, the toys magically come to life. Interestingly, these include a wobbly Laurel and Hardy, who were very popular at the time with their comedy shorts and movies.

The main character in the story is a tin soldier whose leg was broken by the toy maker. He was cruelly thrown into a bin, but manages to jump out onto the wooden floor. He then has to hobble around on his one leg, using his gun for balance, with the other toys laughing at him and shouting "he's only got one leg!". In our politically correct world, I doubt very much that this scene would be allowed in a cartoon today.

A musical ballerina toy takes pity in the soldier and he instantly falls in love with her. Unfortunately, a king also falls in love with her and tells the poor soldier to disappear. He starts kissing the ballerina, making the soldier very angry indeed. He takes a match from a box of matches and fires it from his gun. The flaming match lands on a rocket firework, sending it straight up the rear end of the king - now that's what you call a pain up the you know what!

Infuriated, the king sends his own soldiers after the lame soldier and summons him to court. He is found guilty and the king sends him for execution, despite pleas from the ballerina to save him. Both the soldier and ballerina are shot with such force they end up on on a roaring fire and go straight to toy heaven. It's a very happy ending, with the soldier being full repaired and spending the rest of his days with his beloved ballerina. 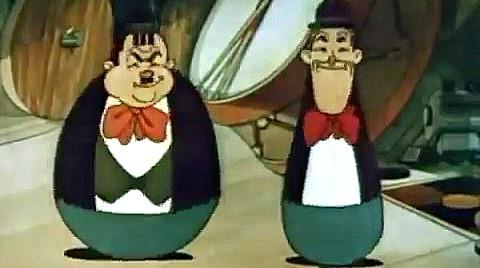