The Goodies - The Complete Collection

"Goodies, goody goody yum yum". Ah, the opening line of the show's theme tune brings back fond memories of watching this chaotic comedy with my Mum and Dad (although they were completely perplexed by it all), and you can revisit your childhood by watching one of the many episodes in the video playlist above.

This was a pretty surreal comedy, to say the least, and it was like watching a combination of a Tom and Jerry cartoon that had been brought to life by a wizard on acid, and a Laurel and Hardy short, with a heavy reliance on slapstick routines. The series is probably best-remembered for its use of quirky video editing effects and over-sized animals - remember the giant Dougal dog from The Magic Roundabout? 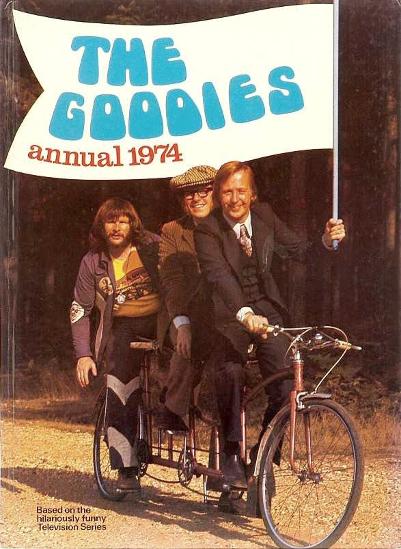 Did you receive this for Christmas? The Goodies Annual 1974 featured a mix of illustrated stories and comic strips.

The series originally aired between November 1970 and February 1980 on BBC2. The final series was shown on LWT in 1981 and 1982. The stars and writers of the show were Tim Brooke-Taylor, Graeme Garden and Bill Oddie. At it's peak, the series attracted around 15 million viewers, which is exceptional for a BBC2 show. In fact, it became so popular that during filming the police were called in to stop the numerous fans from disrupting everything.

The three comedy actors first met at Cambridge University, and it was here that they became friends with Graham Chapman, Eric Idle and John Cleese who all starred in their own surreal comedy show Monty Python's Flying Circus.

In earlier series' of the show, all three actors co-wrote the comedy sketches and storylines. However, later on in the series this was left to just Graeme Garden and Bill Oddie. The music that featured in the series was actually penned by Bill Oddie, and he also co-wrote the theme music with jazz composer Michael Gibbs.

There were 69 episodes in the series which each one lasting 30 minutes, apart from two Christmas specials which lasted for 45 minutes. The show used ground-breaking special effects and editing techniques, including Chroma Keying where two separate video streams are layered together (or a video stream and a static image) based on their colour hues. Basically, the background is removed and replaced by separate footage or a static image, usually using a blue or green screen. Stop motion techniques were also used liberally in the show, and these were also quite uncommon at the time. 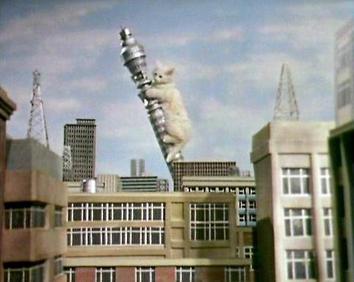 This is a screenshot taken from an optical disc, television broadcast, web page, computer software or streaming media broadcast. Copyright holder: The producers of The Goodies, https://en.wikipedia.org/w/index.php?curid=7252951

Slapstick comedy and sped-up video techniques were used frequently throughout the series. You may remember that the Goodies often travelled around on a tandem bike, frequently falling off and getting into all sorts of scrapes. The three flatmates were often short of cash, too, and would hire themselves out to take on an array of absurd tasks, and a lot of the comedy was based around this.

Political and philisophical themes were sometimes used, and I remember one episode where the entire black population of South Africa emigrated to the UK to escape Apartheid, leaving the white people with nobody to exploit. A new system called "Apart-height" is introduced which discriminated against short people, including Bill Oddie and numerous jockeys.

One of the most iconic episodes was Kitten Kong, in which Graeme creates a growth formula which he feeds to a fluffy white kitten called Twinkle. The kitten grows to gigantic proportions and escapes, and the trio set out to capture him. However, that's not before Twinkle manages to destroy The Post Office Tower (GPO Tower) and St. Paul's Cathedral, and also flatten TV presenter Michael Aspel under his paw in the process.

This episode won a Silver Rose award in 1972 at the Festival Rose d'or in Montreaux.

Remember this song? I actually have the 7 inch single gathering dust in a box somewhere, although I'm not quite sure where! The song was released as a single in February 1975, and became a top five hit, peaking at #4 in the UK. The B-side was entitled Sick Man Blues and was written by Bill Oddie. The A-side was arranged by Tom Parker (with interference from Bill Oddie) and the backing track was by an R&B band called Gonzalez. 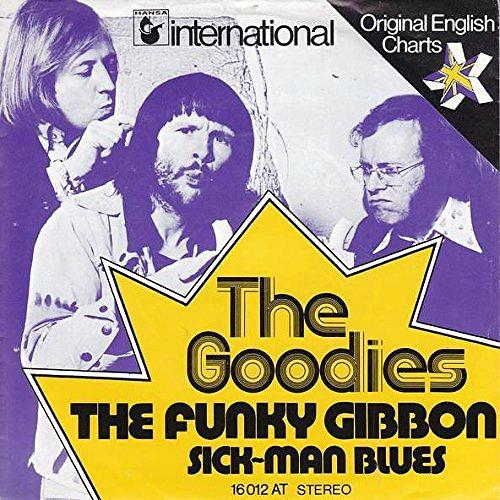 To my knowledge, the BBC have never show a re-run of the series, only occasionally airing the odd episode every now and then. This could be down to the fact that the programmes haven't aged terribly well, and relied quite a bit on mocking the political events and TV stars of the day. Some scenes would be deemed as racist in today's politically correct world, particularly with the use of the n-word in the aforementioned "South Africa" episode.

However, it has often been reported that there has always been an air of snobbery at the BBC towards The Goodies, and it was seen as "Monty Python for children". Or could it be that the Beeb still bear a grudge towards the trio for moving to LWT for the final series - who knows? 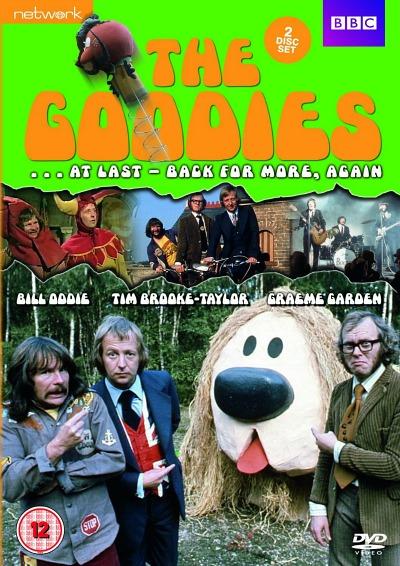 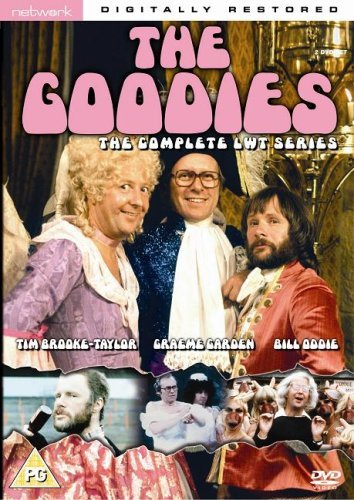 The Goodies - The Complete LWT Series 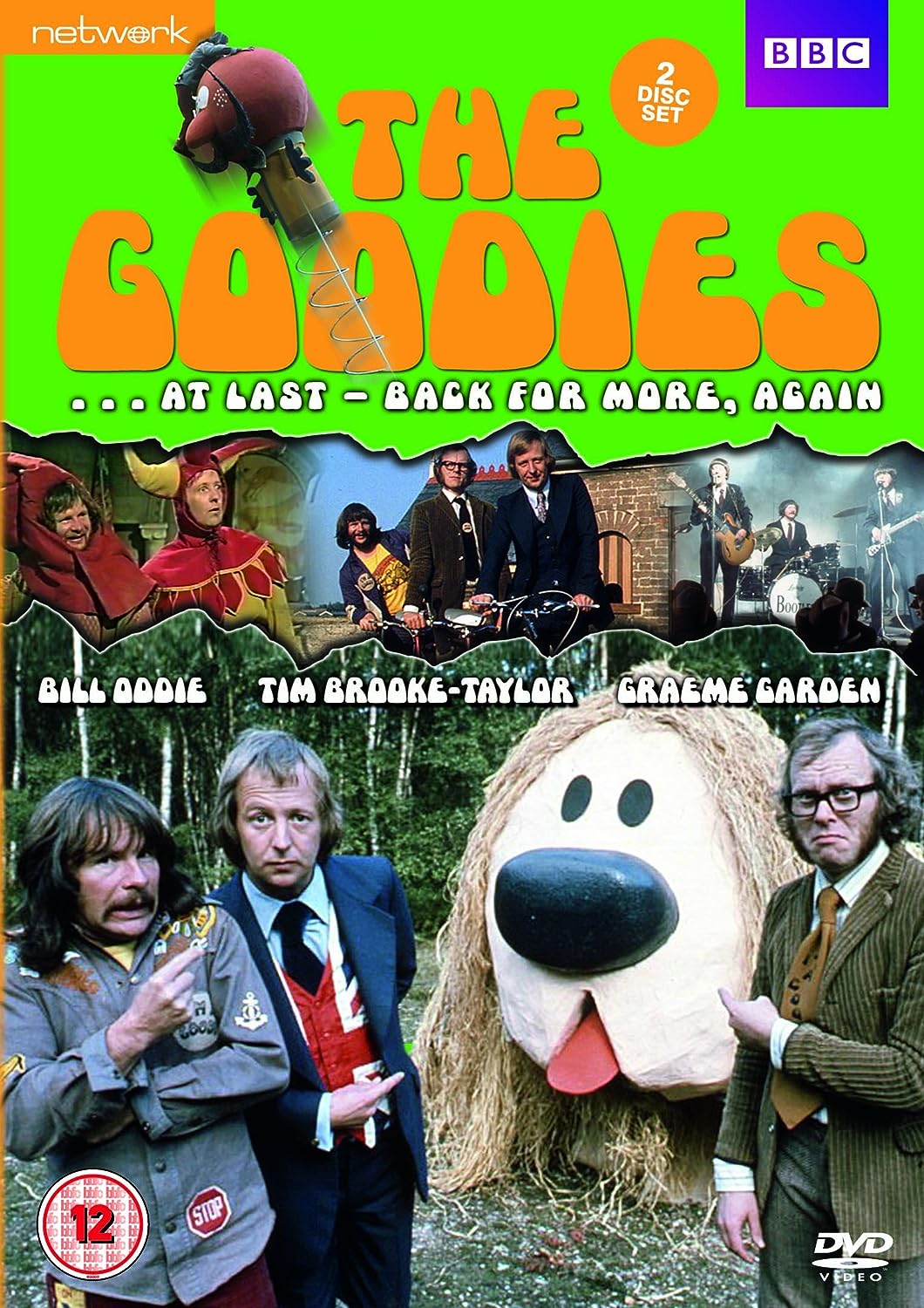 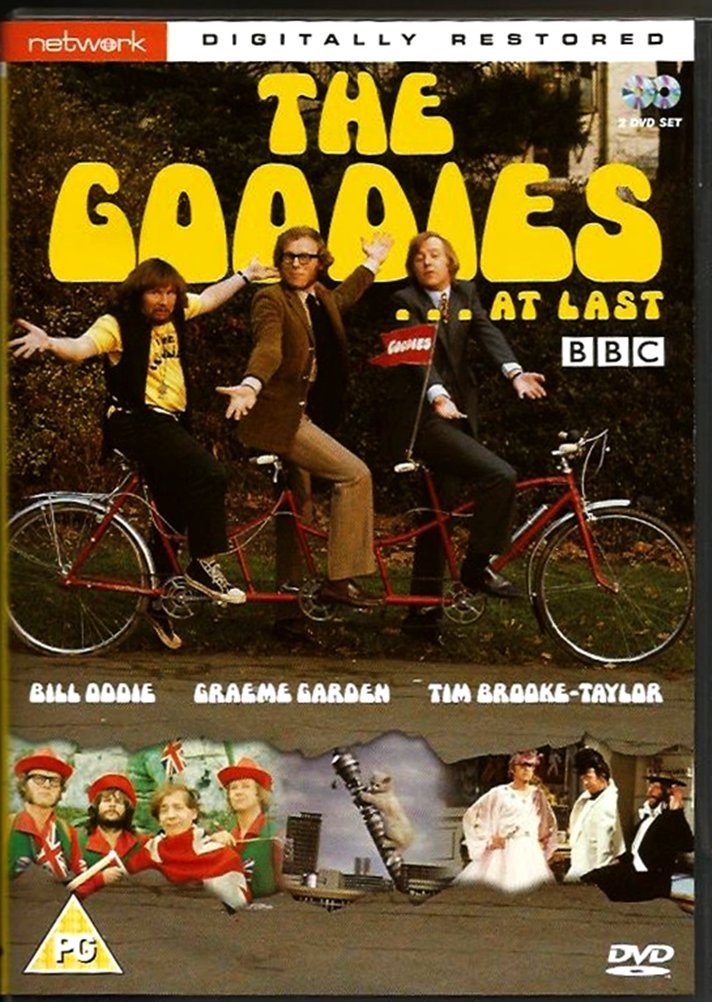 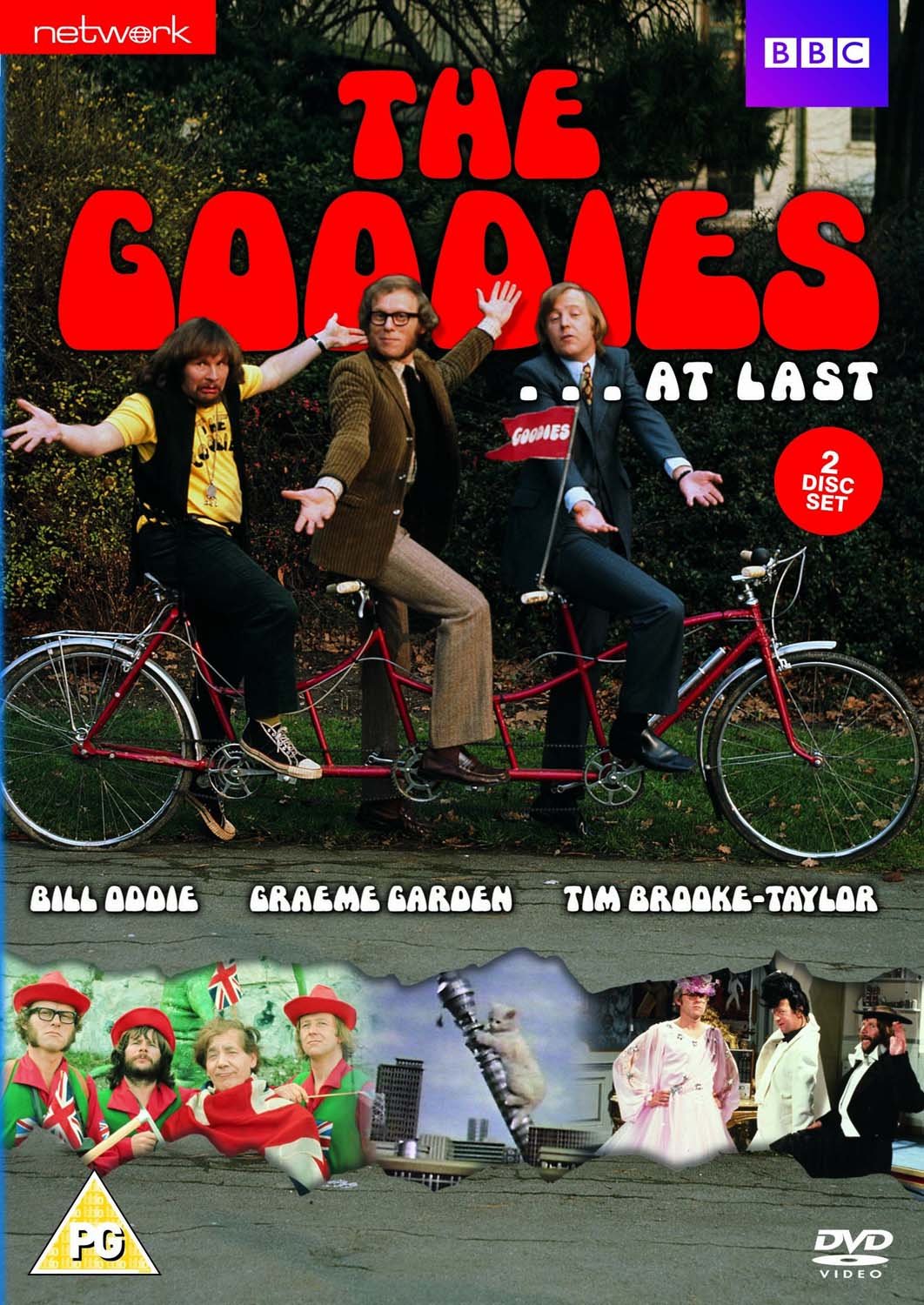 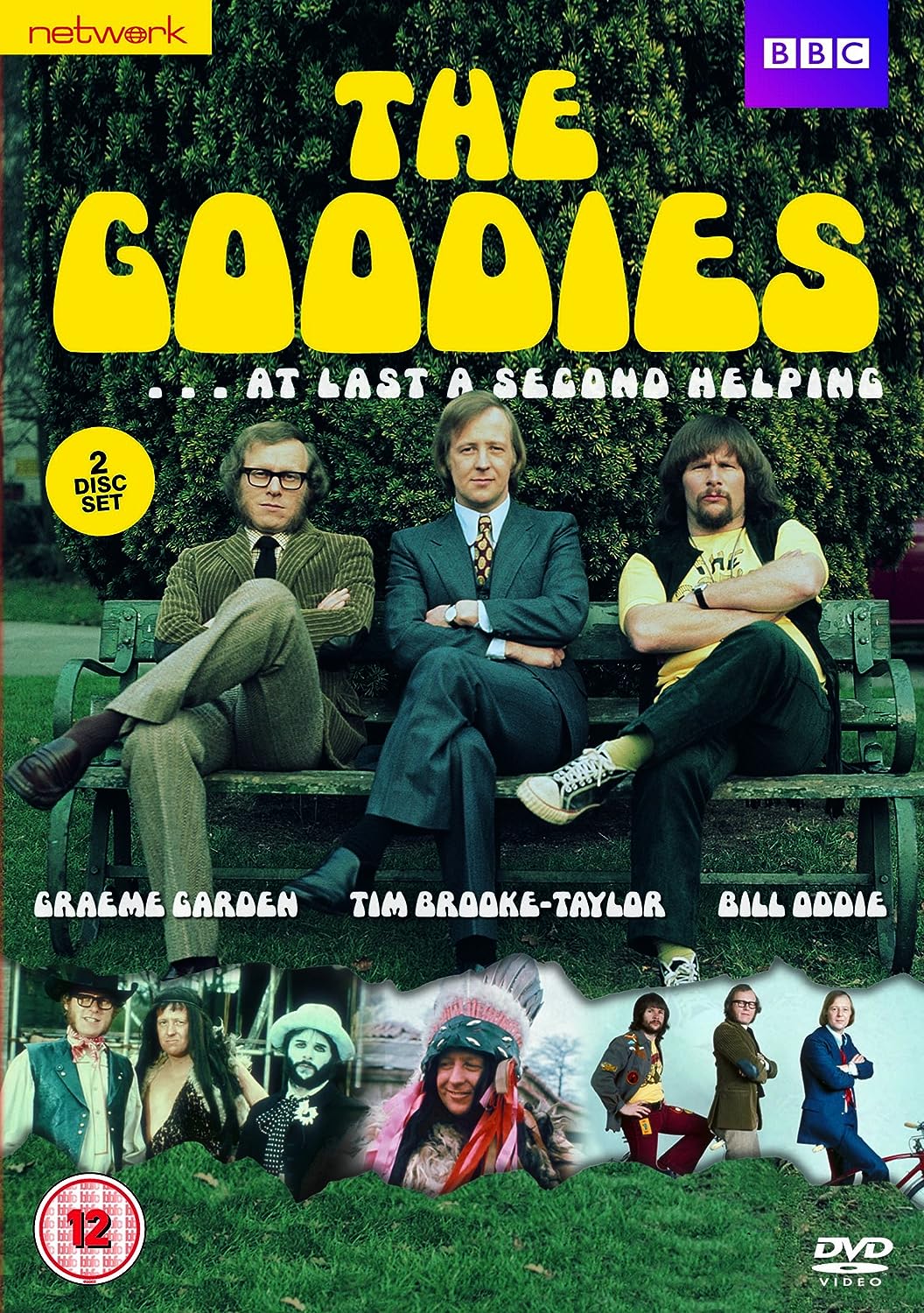 The Goodies ...At Last a Second Helping 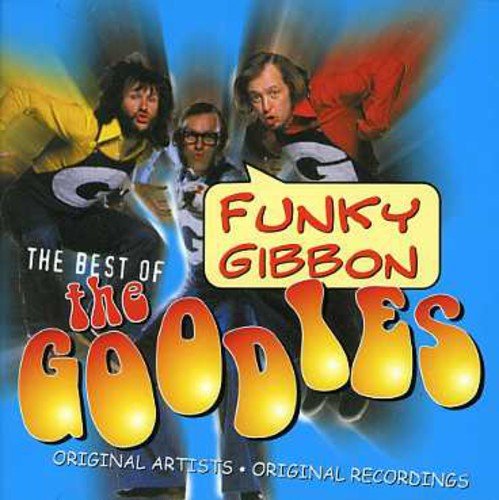 Funky Gibbon: The Best Of The Goodies 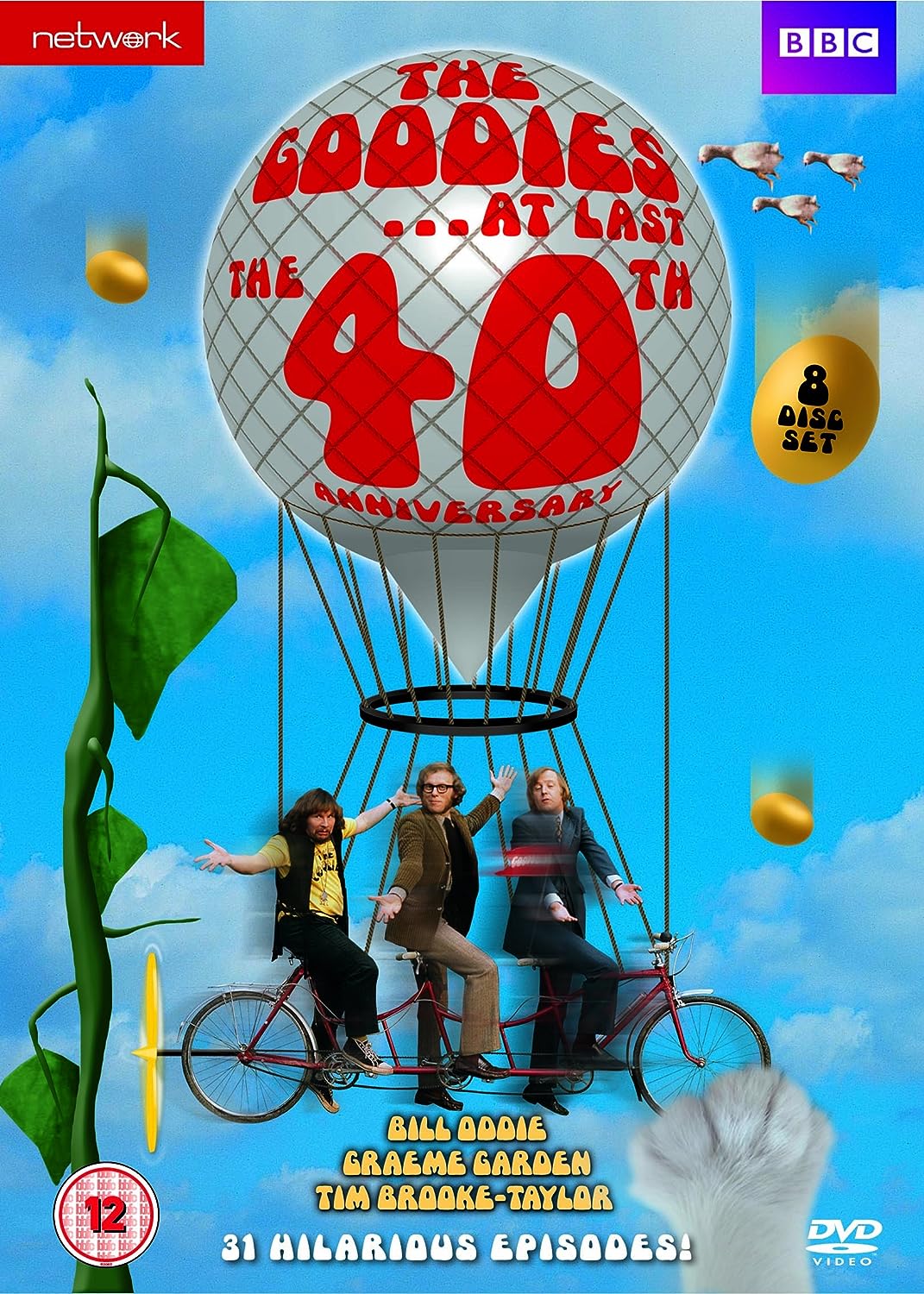 The Goodies ...At Last the 40th Anniversary!The Goodies Rule OK: The Official Story 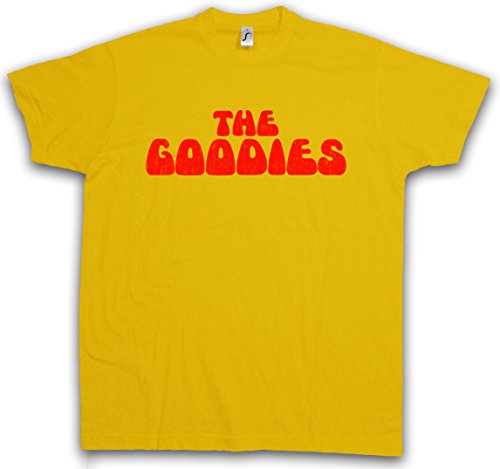 The Goodies T-shirt - S to XXXL 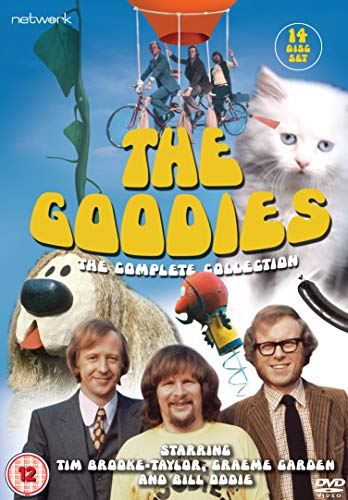 The Goodies The Complete Collection DVD