If you've watched the iconic 80s movie, then you don't need me to tell you that the storyline of The Goonies revolves around a gang of kids who embark on an amazing adventure to find hidden treasure in order to save their homes. The local Astoria Country Club wants to expand and construct a golf course in the Goon Docks neigbourhood in Astoria, Oregon, which is exactly where brothers Mikey and Brandon Walsh happen to live. 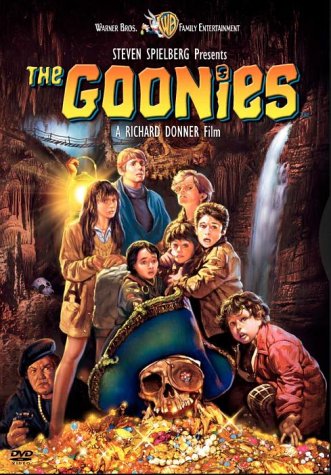 Raising money to stop the development just isn't an option. However, when Mikey discovers an old Spanish treasure map leading to the hidden fortune of 17th century pirate "one-eyed Willy", the brothers gang-up with their friends, Chunk, Mouth, Andy, Stef and Data - calling themselves the Goonies - and embark on a wild adventure to locate the treasure. 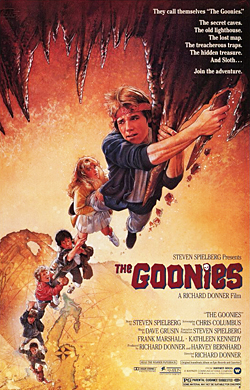 Unfortunately, the treasure appears to be located right underneath the hideout (a derelict restaurant) of evil thief Mama Fratelli and her sons Jake, Francis and the deformed Sloth. The gang wait for the Fratelli's to leave the hideout before entering, but find themelves trapped after the Fratellis unexpectedly return. The Goonies are forced to use an underground cavern to escape, but Chunk is caught by the family and placed into a room with Sloth. However, Sloth becomes friends with Chunk and agrees to help the gang find the hidden pirate treasure.

Meanwhile, the rest of the Goonies continue their journey into the cavern and discover a larger cavern and lagoon where the pirate ship "The Inferno" rests. The gang find a whole stash of treasure, and unable to contain themselves from the excitement begin to fill their pockets. However, on leaving the area the Fratelli family catch the kids and force them to walk the plank. What pirate movie would be complete without this classic scene?

Chunk and Sloth arrive just in time to rescue the Goonies which leaves the Fratellis free to ransack the ship. However, in doing so they trigger a booby trap which causes the cavern to collapse in spectacular fashion. Fortunately, the Goonies managed to escape through a hole and stumble upon a beach. They are discovered by two passing policemen and are eventually reuinted with their families. Meanwhile, all the Fratellis are arrested apart from Sloth who goes to live with Chunk. The good news is that Mikey managed to grab enough jewels from the ship to pay off the Astoria Country Club and save everyone's homes.

Written and co-directed by Steven Spielberg, The Goonies is an excellent family adventure film from the 80s, and while some adults may not enjoy it, the swashbuckling movie will certainly entertain the younger ones with its crazy booby traps, baddies and the vast underground world of caverns.

What is surprising is that the film's producer and co-director Richard Donner is also the director of 18 rated movies such as Lethal Weapon and The Omen. Anyway, all I can say is let's just hope they never decide to do a remake as they nearly always suck! 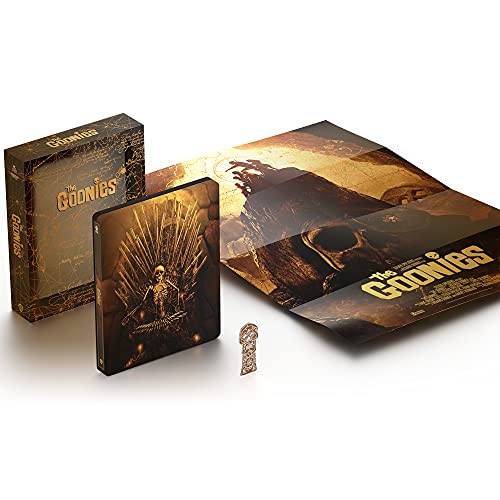