After Noel Edmonds had stepped down from Swap Shop early on in 1982, he found a new role presenting a brand new Saturday evening show on BBC1. The Late Late Breakfast Show ran for five series from 4th Sept 1982 until 8th Nov 1986, with 77 episodes and 4 specials. Co-presenters included Radio 1 DJ's Mike Smith and John Peel.
However, the show was nearly axed after it struggled in the ratings early on in series 1, and Edmonds' co-presenter, the Scottish actress Leni Harper, was sacked after just three episodes. Several revamps were tried out, with producer and director Michael Hurll finally settling on wheeling in well-known pop stars, which helped boost ratings - ABBA appeared twice in the first series.
The theme tune for the series was penned by Gary Kemp and performed by Spandau Ballet, with incidental music by Paul Hardcastle.
Show Segments
The Golden Egg Awards showed compilations of bloopers, which eventually included viewers home videos.
The Golden Gauntlet featured a team of people taking on a crazy challenge.
The Hit Squad featured Jeremy Beadle style hidden camera stunts.
Mr Puniverse showcased Britain's wimpiest men.
Claim to Fame featured people with an unusual talent who wanted their 5 minutes of fame.
An Eagle Eye Award was given to a viewer who spotted a deliberate mistake in the show. 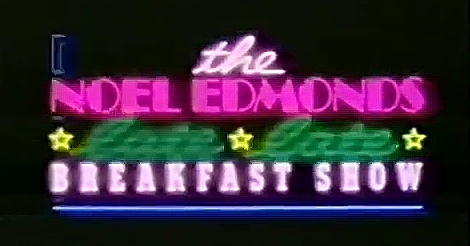 Paul McCartney Row
When Paul McCartney and Michael Jackson's duet "Say Say Say" entered the UK singles chart on 9th October 1983, the video was not even finished, which resulted in the single falling from No.10 to No.13 after just two weeks in the chart.
When the video was finally ready, this gave the BBC a major headache! Their Top Of The Pops policy was not to show any performance or video by an artist that had fallen in the charts. Paul McCartney flew to London to premiere the video on the show, but the BBC refused to show it. Apparently, during a blazing row, McCartney threatened to withdraw all of his songs from the corporation.
The sweeten the mood, the beeb agreed to air the video a couple of days later on The Late Late Breakfast Show, but only if McCartney would appear for a live interview. Paul and his wife Linda both appeared on the show on Oct 29 1983 in a rather awkward interview. Linda looked particularly uncomfortable (see the video at the top of the page), especially at 10:47 just after the airing of "Say Say Say" when Noel Edmonds referred to an earlier comment he had made about Linda "looking lush" in the video. Nonetheless, the song climbed the charts from No.14 to No.3 on the chart released on 6th Nov.
Controversial Stunts
Certainly the most controversial part of the show was the live stunt segment Give It A Whirl, with many serious injuries resulting from the stunts. On Sat 10th October 1983, stunt driver Richard Smith flipped his car at 140mph while trying to leap over 230ft, resulting in multiple injuries including a broken pelvis. The stunt was introduced by John Peel, who was axed from the show soon afterwards, although he was not to blame for the crash.
The Death of Michael Lush
However, much worse was to come when Michael Lush was killed during a bungee jump stunt in 1986 which resulted in the show being cancelled. The BBC was prosecuted by the Health and Safety Executive for breaches of the Health and Safety at Work Act 1974, although the maximum fine that could be given was just £2000 plus costs. Had the case gone to the Crown Court, the fine would have been much higher. The BBC made a voluntary payment of around £120,000 to Lush's family.
In this clip from 1983, Agnetha Faltskog from ABBA helps Noel with The Golden Egg Awards, before performing her latest solo single.

Breakfast TV in the 80s