The Mobiles "Drowning in Berlin"

English Synthpop band The Mobiles scored a #9 hit with Drowning In Berlin in 1981, and, sadly for them, it became a one hit wonder. I really like the Top Of The Pops performance featured in the video clip above, and the sound reminds me of Toyah. The follow-up single Amour Amour failed to break into the Top 40, stalling at #45. The song was the title track to the band's only album. 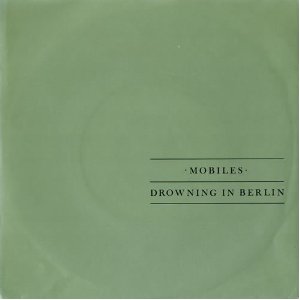 This has to be one of the most dull-looking, uninspiring single sleeve designs I've ever seen! Whoever designed it, what were they thinking of?

There were six band members; Anna Maria on vocals, Chris Downton and Russ Madge on guitars, bassist David Blundell, Eddie Smithson on drums, and keyboardist John Smithson.
Maria and Madge went on to form The Avengers.

Lyrics for Drowning in Berlin