Along with its sequel, The Terminator is one of my all-time favourite movies, and definitely my favourite movie of the 80s. The trailer above seems rather cheesy by today's standards, but I'd sooner have a bad trailer and a great movie rather than the other way on, which seems to be the case with many films these days.

First released in October 1984, the movie wasn't really expected to be a success. Just how wrong could everyone be? The film was No.1 at the Box Office in America for two weeks and boosted the careers of Arnold Swarzenegger and James Cameron significantly.

Obviously, Arnie isn't the greatest actor in the World, but his deep Austrian accent seemed to have the perfect robotic qualities for the role, although he spoke only 18 lines in the entire movie!

Directed and written by James Cameron, the movie starts in the post apocalyptic world of 2029, where machines are terminating what little remains of the human race. However, the main bulk of the movie focuses on 1984, where an emotionless Terminator cyborg programmed to kill Sarah Connor (played by Linda Hamilton) and the human resistance fighter Kyle Reese (played by Michael Biehn) sent to protect her, have been sent back in time.

Browsing through a telephone directory to locate every Sarah Connor in Los Angeles, the Terminator kills two other Sarah Connors before tracking the one he really needs to terminate in a nightclub called Tech Noir. Fortunately, Kyle is Sarah's knight in shining armour and saves her, allowing them to escape from the nightclub together. 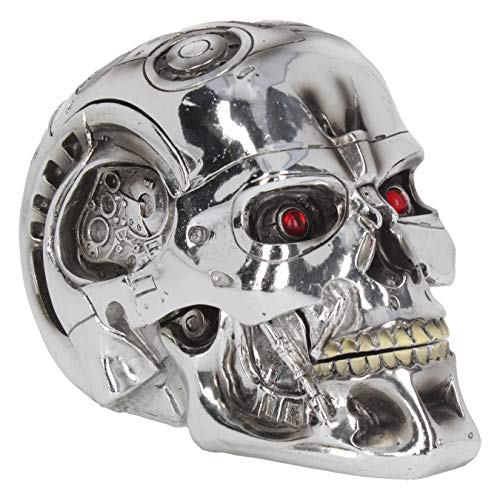 Initially, Sarah thinks that Kyle is a mad man and is constantly trying to escape from him. As soon as they get a quiet moment together he explains to her that Skynet, an artificial intelligence network, will start a nuclear holocaust, and that the reason the Terminator wants to kill her is because her unborn son leads a resistance movement against Skynet and the rampaging machines. The movement is close to victory and, therefore, has sent the Terminator back to 1984 to kill her and stop her son from being born. Sarah is still unconvinced, but as events unfold later on, she is eventually convinced by his story.

The Terminator tracks them down and after a car chase, Kyle and Sarah are arrested and taken back to the police station. Police officers explain to Sarah that Kyle is mentally ill and keep her safe at the station. The Terminator tracks them down again, and in some of the most violent scenes of the movie, kills all of the police officers, leaving a trail of destruction.

Once again, Kyle and Sarah escape and manage to locate a motel to hideout in. This is where they get rather intimate and have a bit of nookie together. Ahem, quickly moving on...

The fun doesn't last, though, as the Terminator tracks them down again and injures Kyle.  In another action-packed chase scene, while driving a tanker truck the Terminator is severely damaged when it explodes, causing the cyborg's coating of skin to melt away.

Fortunately, Kyle and Sarah make it to a factory, but the relentless Terminator is still determined to kill Sarah! Kyle manages to shove a pipebomb up its rear end causing massive damage, but also killing himself in the process. Somehow, it still manages to crawl after Sarah but is finally deactivated in an hydraulic press.

The Terminator is a slickly executed movie, and as far as action thriller's go, it doesn't get much better than this!

Most memorable line from the movie - "I'll be back!".

Listen to the full Terminator theme tune by Brad Fieldel at simply eighties. 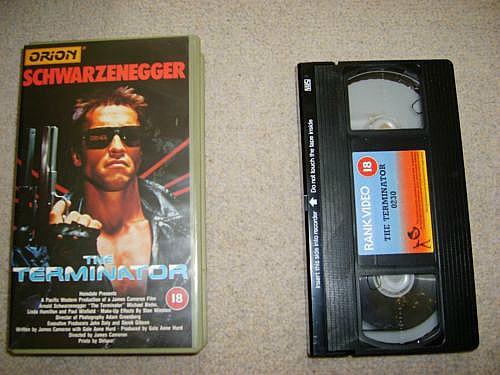 An idyllic night in during the 80s. How I miss popping down to the local video rental store. 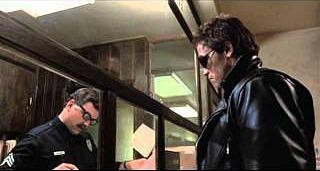 Screenshot of the classic "I'll Be Back!" scene where the terminator cyborg (Arnie) is denied access to the police station to gain access to Sarah Connor. 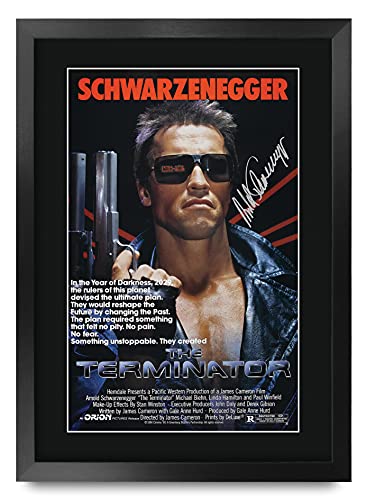 The Terminator Signed A3 Poster in FrameBUY from AMAZON