"Thunder...thunder...thunder...Thundercats!" Well, I certainly remember the theme tune, and this classic animation is regarded as one of the best (if not THE best) cartoons to come out of the 1980s by many. Thundercats originally aired between 1985 and 1989, with dozens of comics and a video game also released on the back of the show's popularity.

The series was created by the American writer Theodore Walter "Tobin" Wolf (more well-known as "Ted" Wolf) and was animated in Japan, which would explain the sophisticated and detailed animation. A remake of the cartoon (and a resulting resurgence in popularity) aired in 2011/12, but for this article I'm going to concentrate on the original series.

Have you seen our Thundercats T-shirts page? 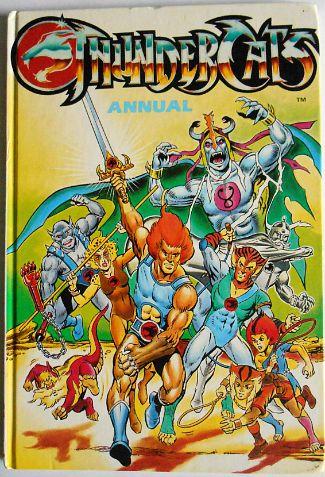 Thundercats are cat-like humanoids (called Thunderans) that originate from the planet Thundera. Their home planet is destroyed and a remaining small group manage to escape on the one surviving space ship (with half engine power) which is attacked by mutants. They crash-land on a nearby planet called Third Earth. The eldest Thundercat and the ship's commander, Jaga, is killed in the crash while the other seven survive by being in stasis tubes.

Lion-O takes over the role as leader and helps to protect the survivors with his "Sword of Omen" weapon. The group befriends various nearby groups on the planet and then design and build a fortress. However, they are under constant threat from evil villains such as Mumm-Ra and mutants that have already killed the other remaining Thunderans. 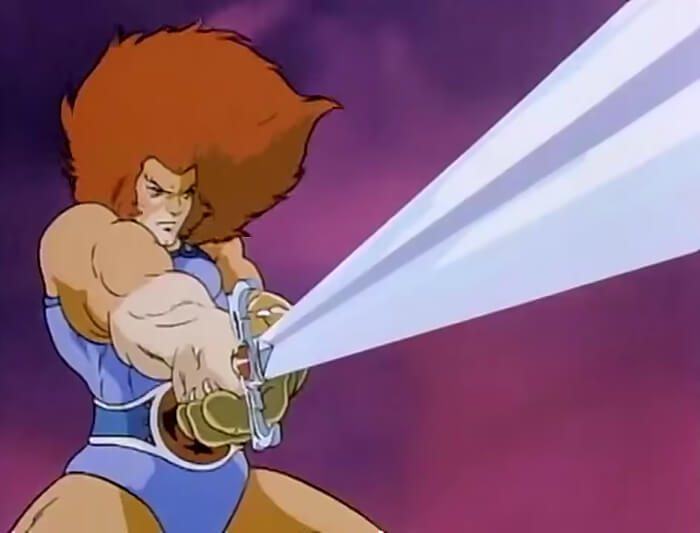 Lion-O is the Lord of the Thundercats and the son of Claudus. His weapon is the Sword of Omens as shown here, which has a virtually indestructible blade which retracts into a dagger when not in use. Lion-O is the largest and most perfectly muscular of all the characters (although not as strong as Panthro), and has cunning fighter skills. 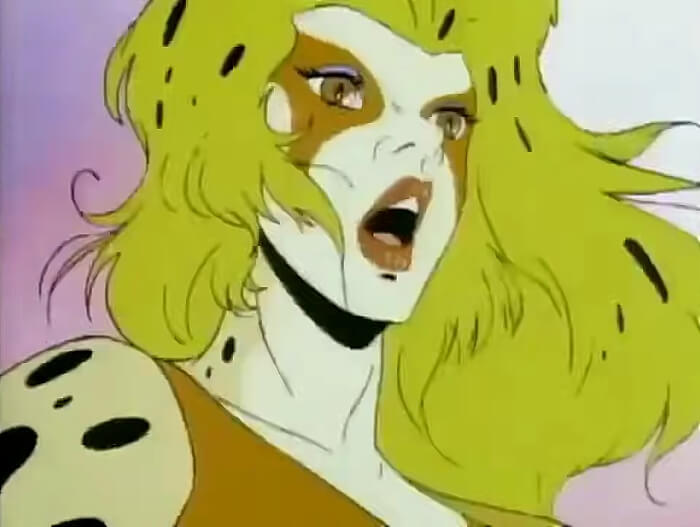 Cheetara is a female warrior and was initially the only adult female character. She is brave but caring, and can detect danger using her sixth sense. Like a cheetah, she is very fast, but only for short periods, but uses it to easily dodge attacks. She has an athletic build and wears an orange/brown leotard with orange boots. 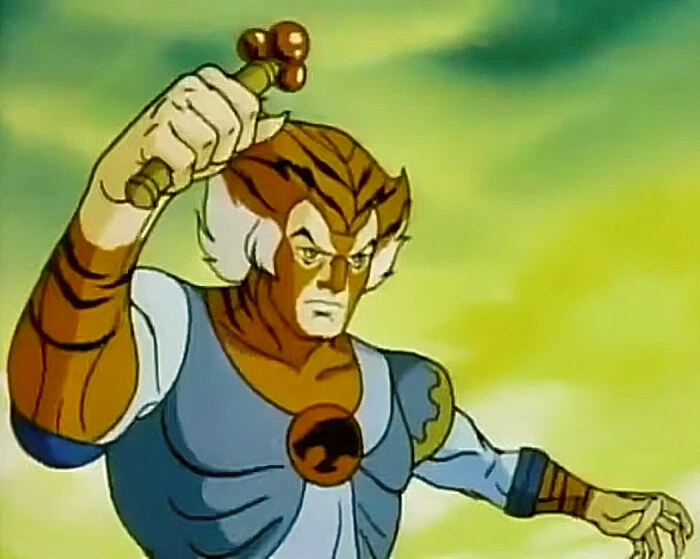 Tygra is a quiet, calm and sensible warrior character who designed the Cat’s Lair and the Tower of Omens. His weapon is the bolas whip as shown above. He can use mind power to create illusions in other people's brains. 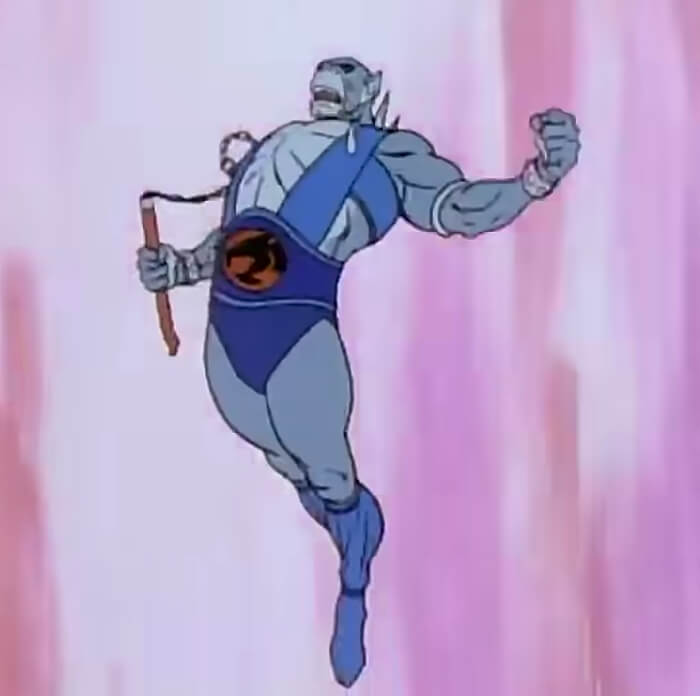 Panthro is regarded as the strongest of all the thundercats, although he is scared of bats! He is an excellent warrior with martial arts skills. He and Tygra build the vehicles used on third Earth. His weapons are chained fighting sticks which are loaded with chemical sprays. He also has spiked chest bands as an extra defence/weapon. 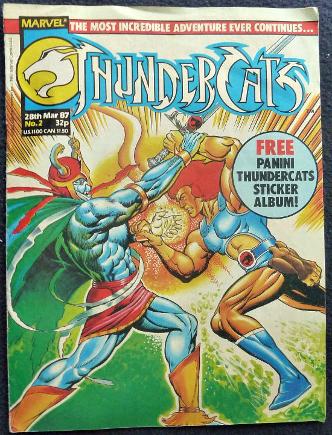 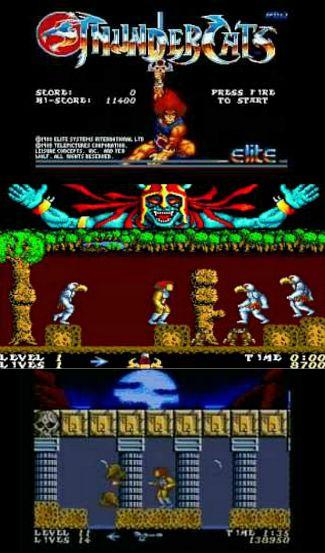 A side-scrolling, Thundercats computer game was released by Elite in 1987 for both the 8-bit and 16-bit home computers. The montage above features screenshots from the Commodore Amiga version. 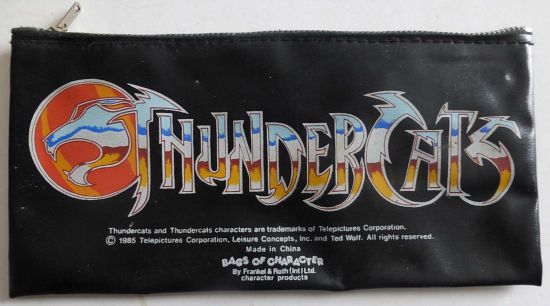 An original Thundercats pencil case from 1985 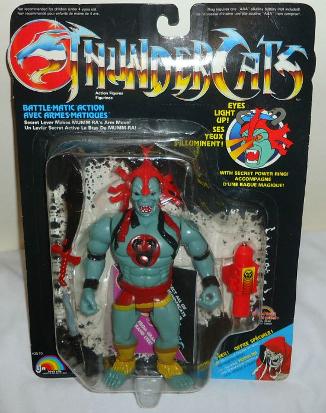 I recently spotted this unopened 1980s Mumm-Ra action figure with light-up eyes selling for £289.99 on ebay! 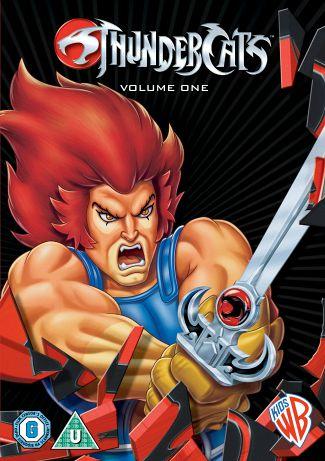 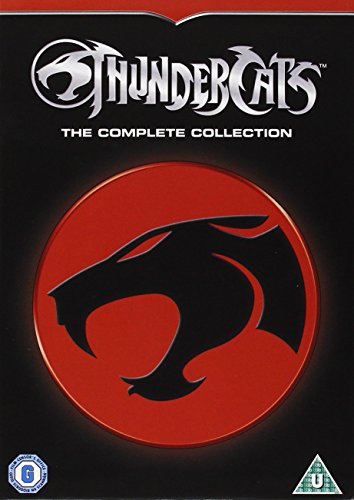