If you were a child of the 70s and early 1980s, there were two choices for Saturday morning TV viewing, the wholesome Multi-Coloured Swap Shop or the anarchic TISWAS, and the debate still rages on amongst the middle-aged about which show was better! Did you prefer Lenny Henry or John Craven? Maggie Philbin or Sally James?
The video compilation above features some of the best and funniest moments from TISWAS, so be sure to check it out! 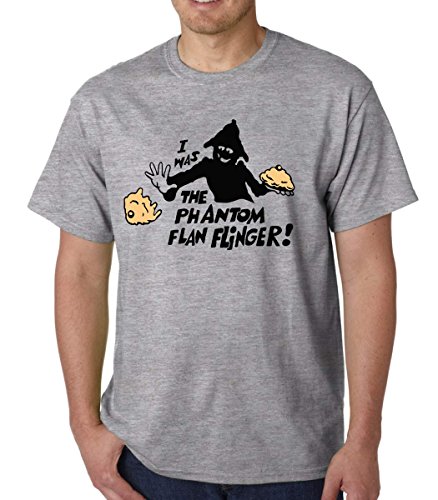 I Was The Phantom Flan Flinger T-shirt

If you preferred your entertainment to be scriptless anarchic fun, then TISWAS was the No.1 choice, and it was the only choice if you wanted to be in with the cool kids at the back of the class. It served no purpose other than to get everyone on the show covered in as much custard and water as possible, with both kids and parents being locked in a cage and absolutely drenched.
Middle class adults would argue that it was "loutish" (even though they were probably secret viewers), and some even banned their kids from watching it, instead preferring them to watch other middle class children swapping an Etch-a-Sketch for a View-Master. Personally, I watched both programmes, switching the channels regularly whenever I got bored with a certain segment.
Today, of course, a ruleless show like TISWAS would never make it past the health and safety brigade. So you should be truly grateful you grew up with such freedom, because kids today will never experience this, in more ways than one.
TISWAS (an acronym of This Is Saturday Watch And Smile) was created by ATV and first aired on ITV on January 5th 1974, attracting up to 4 million viewers. However, some regions couldn't view the show until 1981. Chris Tarrant was the main host, with the saucy Sally James joining in 1977. You may remember her interviewing many major rock and pop acts of the day, including The Clash and Motorhead, would you believe?
While I'm on the subject of pop music, you may remember that TISWAS had their own chart hit. The Four Bucketeers (Chris Tarrant, Sally James, Bob Carolgees (without Spit the dog) and John Gorman) hit the charts with "The Bucket of Water Song" in 1980, which reached No.26. I've just listened to it again for the first time in almost 40 years, and was surprised by how much of it I still remember!

Other presenters included Sylvester McCoy, comedian Lenny Henry (you may well remember his Trevor McDoughnut impersonation) and occasionally Jim Davidson and Jasper Carrott - the latter introduced us to the "Dying Fly" dance.
Adding to the chaos was The Phantom Flan Flinger ("Oh no!"), and the cameramen often found themselves with a face full of his creamy delight. Actually, I remember Sally James stating that it was shaving foam in an interview with the Sunday People, and that it wasn't that delightful to get it in your eyes. Referring to those flans she stated "they stung like hell!".
However, it wasn't wall-to-wall water and flan throwing, and there was plenty of time for competitions, pop performances, film clips and funny sketches.
The main presenters for series the early series' were Chris Tarrant, John Asher, "plummy-voiced" Peter Tomlinson (the show's creator), and Trevor East, although Asher left later in 1974. During series 4, Sally James and Jim Davidson joined the gang, although Davidson left after just a few episodes, but made occasional appearances after this. John Gorman (a former member of comedy musical trio The Scaffold) made four appearances, and then became a regular in series 5.

Surprisingly, Bob Carolgees didn't make his first appearance until 1979, and Chris Tarrant was so delighted with his contribution to the programme, that he decided to make him a permanent fixture.
Tarrant, Carolgees, Gorman and Lenny Henry left the programme at the end of series 7 to concentrate an the new late night show O.T.T., which first aired in 1982. This was basically an adult version of TISWAS, with swearing and topless women. However, it was so bad that it was axed after just one series. I certainly remember sneakily trying to watch it on my black and white portable TV without my parents finding out, and the main reason for watching it was to be able to discuss it the next day at school. Oh, and for the breasts!
The final series (8) was presented by DJ Gordon Astley, lead singer of Darts, Den Hegarty, and comic impersonator Fogwell Flax. Sally James became a music editor for the show.
TISWAS was replaced by No.73 hosted by Sandi Toksvig, who looks exactly the same now as she did back in the 80s! 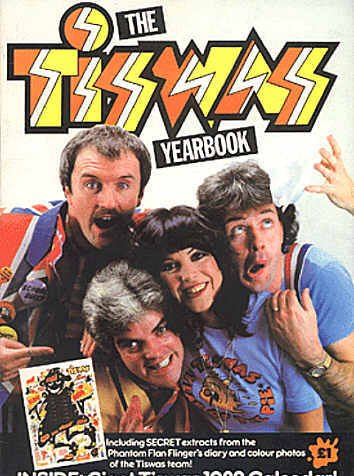 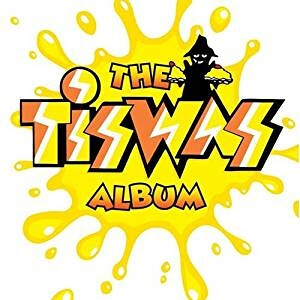