TOP 10 ONLY FOOLS AND HORSES CATCHPHRASES

All of the greatest British comedies feature at least a handful of memorable catchphrases. A recent survey has listed "Lovely Jubbly" as the most popular Only Fools and Horses catchphrase. So with this in mind, I thought I would compile a list of my Top 10 favourite catchphrases from the 80s/90s comedy series.

Most of them come from Del Boy's mouth, and his use of broken French language provides us with some of the most amusing catchphrases - you can read more about these further down the page under No.9. 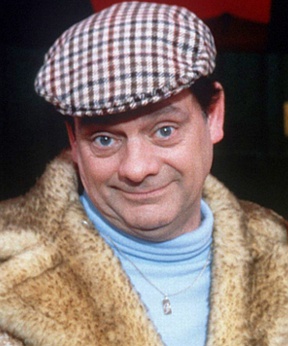 By Source (WP:NFCC#4), Fair use, Link
Some of the cockney slang was unique to the series and created by writer John Sullivan, and some of it was also very close to the knuckle, as you will find out!

Well, it just has to be this one at number one, doesn't it? "Lovely jubbly" became a regular part of Derek "Del Boy" Trotter's vocabulary to describe his delight or approval of something, and it was usually accompanied by him rubbing his hands together. The use of the phrase was certainly popularised by the series during the 80s.
However, the phrase was originally used as a slogan in a 1960s advert for a frozen orange drink called Jubbly, which came in a tetrahedon (4 sided) shaped carton. 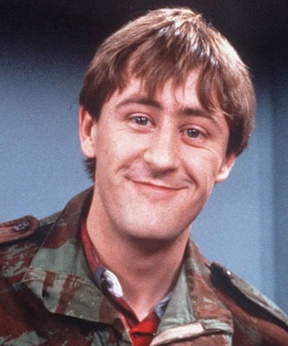 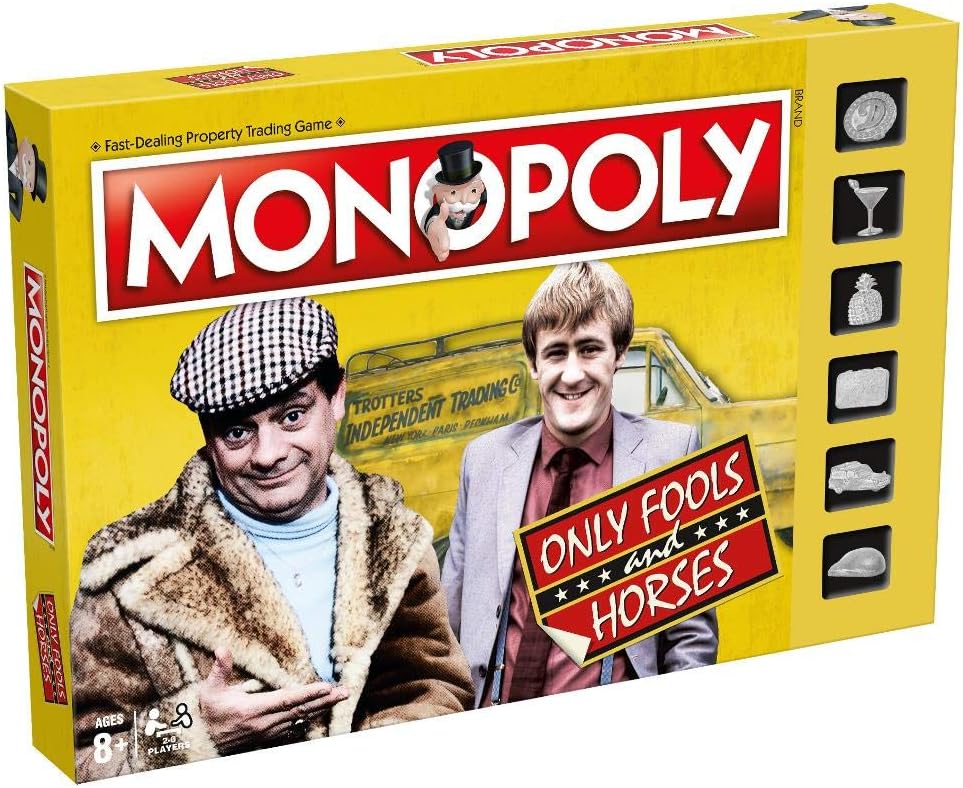 Only Fools and Horses Monopoly Game

The use of the word "plonker" increased substantially across the British population after it was used by Del Boy on a regular basis to put down his brother Rodney, usually after he had done something stupid. I certainly remember it being used in the school playground during the 80s!
However, the use of the word predates Only Fools and Horses, and was originally used to desribe something large or substantial in the 1800s, before being used as a slang term for penis. According to the Oxford English Dictionary, "to pull one's plonker" is to mastubate, so it's pretty surprising that this one slipped passed the BBC's censors, given how sensitive they are to rude words.
Another similar put-down that Del used was "you dozy little twonk, Rodney!".

The original uploader was Goldfinger at Serbian Wikipedia., CC BY 3.0 RS, via Wikimedia Commons

3. This Time Next Year We'll Be Millionaires

Another one of Del's memorable quotes which you just knew he would be repeating time and time again after things never quite worked out for him. That is, until the 1996 episode Time On Our Hands, when Del and Rodney finally became millionaires after they find a rare John Harrison Lesser watch, which sells for £6.2 million at Sotherby's. Cushty!
Until its use in Only Fools, "This time next year..." was a phrase used by wide boys and more law-abiding working class people wanting to escape from their humdrum lives, and it gave them hope and a dream to cling on to - I certainly remember my Dad using it! The series made people think twice before saying it, and it is now a phrase that will leave you open to ridicule, should you choose to use it in a serious manner. 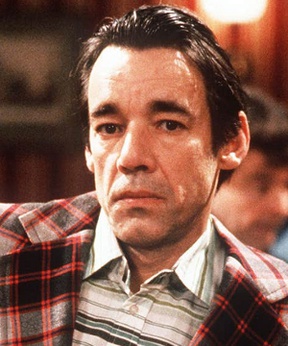 This was used by road-sweeper Trigger to greet Rodney, and his delivery never failed to made me chuckle. One of the funniest lines came in the 1991 episode Three Men, A Woman And a Baby. Trigger had just been talking with Rodney, and Mike the barman asks him what Del and Raquel were going to name their baby. "If it's a girl they're calling her Sigourney, after the actress, and if it's a boy they're gonna name him Rodney, after Dave." 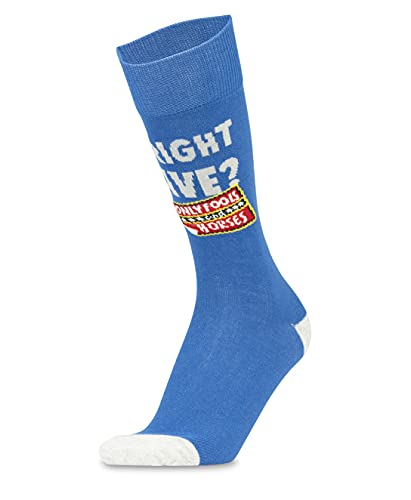 An opening line from Uncle Albert which was a sure fire way to annoy Del Boy and Rodney, or even empty a room. Nonetheless, despite tutting to themselves and rolling their eyes, they would often listen to Albert reminiscing about his time serving in the second world war. These were often stories of misfortune - he served on seven ships that were either torpedoed or divebombed! 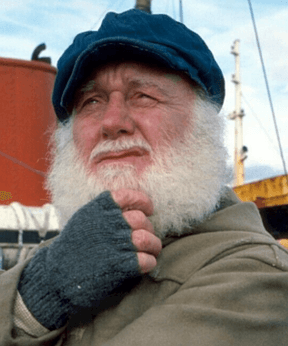 6. You Know it Makes Sense

This phrase was often used by Del Boy when he had closed a deal and persuaded some gullible tart to buy some dodgy gear off him. A highly rated book was released by Ebury Press in 2018 You Know It Makes Sense: Lessons from the Derek Trotter School of Business (and Life).

7. He Who Dares Wins

"Who dares wins" was a motto made popular by the Special Air Service (SAS) and was created by its founder Sir David Stirling. "He who dares wins" (sometimes shortened to "He who dares") was used frequently by Del Boy, although was followed by a massive fail soon afterwards!

Another very memorable word used by Del to describe a nice and comfortable situation. "Cushty" is a word commonly used in Cockney dialect in the East End of London. However, it originates from the Romany Gypsy word Kushtipen, which means happiness/in good order. Del used the word regularly throughout the series, and it was usually accompanied by his unique head and arm movements.

Del Boy mistakingly used "mange tout" as "my pleasure", when it actually means "eat all" and is used to describe sugarsnap peas. Del's use of the French language is always amusing, and he would often confuse a number of french words such as "bonjour" for "goodbye" and "au revoir" as "hello". Other phrases he used were "menage a trois" for "my pleasure" (which is actually used to describe a three people in a romantic/sexual relationship, more commonly known as a "threesome") and "au contraire" for "hang on a minute", which actually means "on the contrary" in English.
He also used "bain marie" for "no problem" (which is actually a heated water bath used in cookery and science), "bonnet de douche" for "excellent" (which is a shower cap) and "pot pourri" as "I don't believe it" which is, of course, dried fragrant flower petals. 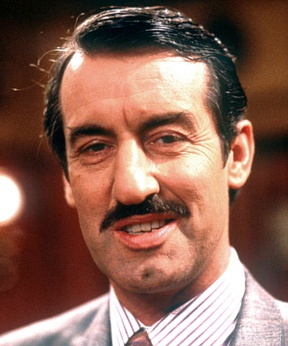 By Source, Fair use, Link

This one was mostly used by Del as a response to a complaint by Rodney. The use of the word "tart" is actually confusing to me, as I always thought it was used to describe a promiscuous woman such as a prostitute, an open pastry case with a filling, or something that tastes sour or acidic. In cockney rhyming slang, "jam tart" is used to describe a fart, and the word "tart" can also be used for improving the appearance of something such as to "tart something up".

Of course, there are many more quotes used in the series. "Do me a lemon" was used by Del to express his disbelief at something. It comes from the more commonly used "do me a favour", with flavour being cockney rhyming slang for favour, hence, the use of the word "lemon" as in lemon flavour.
There were some hilarious one-liners, too. "I'm a black belt in origami", which is, of course, the art of paper folding! Another very memorable line is "They're yuppies. They don't speak proper English like what we do."
The final episode from series 2, A Touch of Glass, is an all-time classic episode, and we all know what happened with the chandelier! The episode also features one of my favourite lines "Asking a Trotter if he knows anything about chandeliers is like asking Mr Kipling if he knows anything about cakes."
Another classic episode Yuppy Love sees Del Boy fall through the bar. But without the line "Play it nice and cool son, nice and cool", it wouldn't have been half as funny!
So there you have it, my choice of the Top 10 Only Fools and Horses catchphrases. I am so glad to have lived through the 1980s and experienced the greatest British comedy ever made, because it's highly unlikely we'll ever see anything like this again in a world where political correctness has almost destroyed comedy.

Only Fools and Horses Gift Shop