To sum up Doctor Who in one sentence, the Doctor is a time lord alien from the planet Gallifrey who travels through time and space in the TARDIS.

Four actors played the role during the eighties and these were; Tom Baker, Peter Davison, Colin Baker and Sylvester McCoy.

There are nine fabulous Video clips in the playlist above featuring all of the four 1980s Doctors. Who was your favourite? Tom Baker was definitely my personal favourite, although the storylines could be a little too dark and gothic at times. I also really liked the dandy Jon Pertwee from the 70s, and William Hartnell as the first Doctor.

The TARDIS (Time And Relative Dimensions in Space) has been disguised as a Police Box since the very first serial in 1963, An Unearthly Child.

The Cybermen Ambush the Doctor & Master 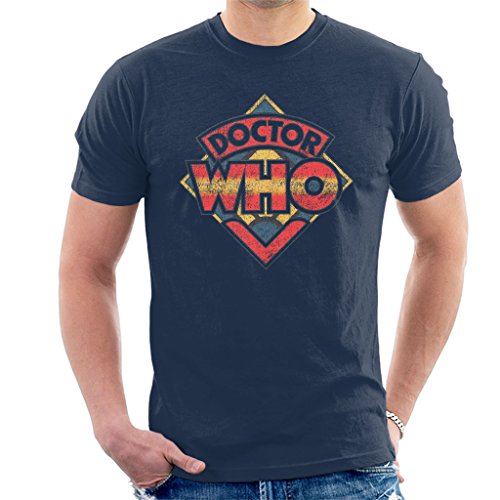 Our video playlist above includes; 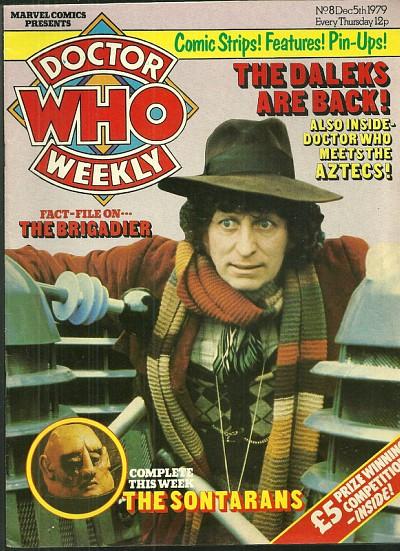 One of the most popular Doctors, Tom Baker, was the fourth incarnation of the timelord and played the part between 1974 and 1981. For many Dr Who fans, Tom Baker is THE Doctor. And judging by a poll we once conducted on Facebook, the vast majority of people agree that he was the best Doctor from the original classic series.

Thanks to Baker's popularity, by 1979, viewing figures were averaging between 9 and 11 million. Audiences of 14.5 million tuned in for the four part Destiny of Daleks story, and this was the first time that we got to see Lalla Ward play his companion Romana.

From Baker's iconic hat and scarf outfit to those manic eyes, this was a very charismatic Doctor who added drama to even the worst storylines, as well as a touch of humour by offering his enemies a jelly baby. Baker appeared in 172 episodes (42 stories). He was replaced by Peter Davison.

Baker is, of course, also well-known for his voice over role in the hit BBC comedy series Little Britain.

Tom Baker had eight companions during his time as the Doctor, with K-9 making the most  appearances - in seasons 15-18 he appeared 20 times. 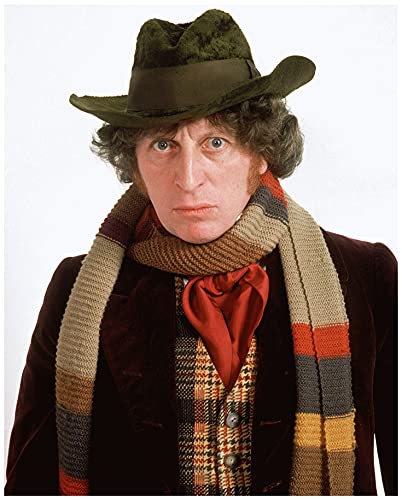 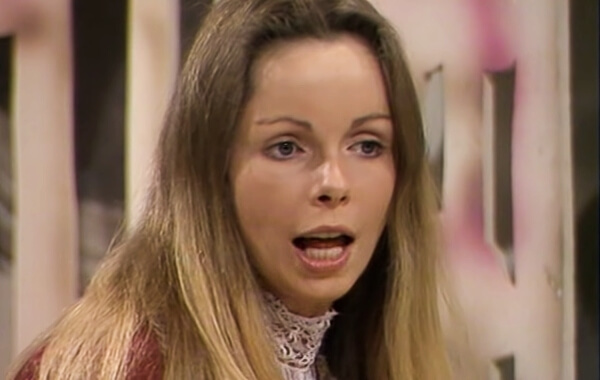 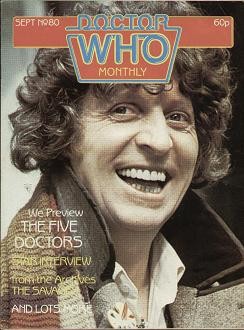 Tom Baker had eight companions during his time as the Doctor, with K-9 making the most appearances - in seasons 15-18 he appeared 20 times.

Other companions were Sarah Jane Smith, Harry Sullivan, Leela, Romana, Adric, Nyssa and Tegan Jovanka. Romana was first played by Mary Tamm and in her second incarnation was played by Lalla Ward. 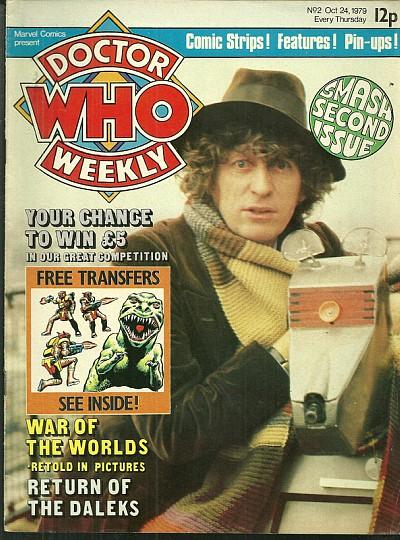 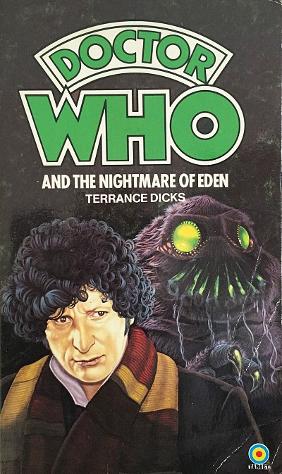 Doctor Who and The Nightmare of Eden paperback 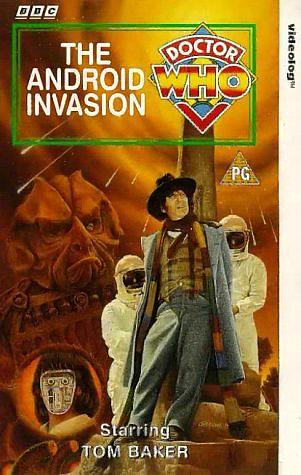 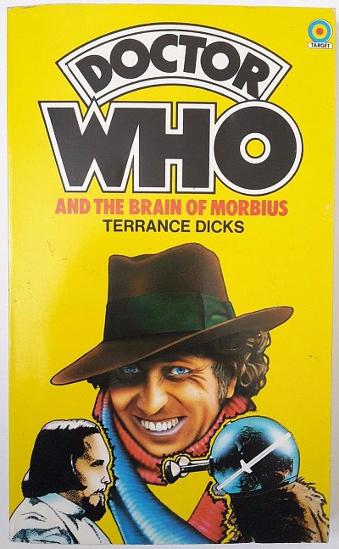 You may remember this range of paperback books that were published by Target back in the 70s and 80s. A good many of them were written by Terrance Dicks. Dicks is now 82 years old and enjoying his retirement. His last novel was Revenge of the Judoon featuring the tenth Doctor (David Tennant) with Martha Jones, which was published on Feb 28th 2008. 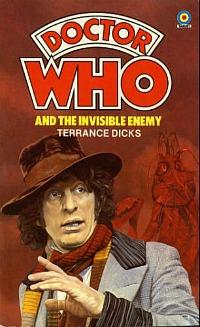 The cover of the book "Doctor Who and The Invisible Enemy" by Terrance Dicks which was published in 1979.

In The Invisible Enemy TV serial which was shown in 1977, the Doctor acquired K-9 the robot dog. 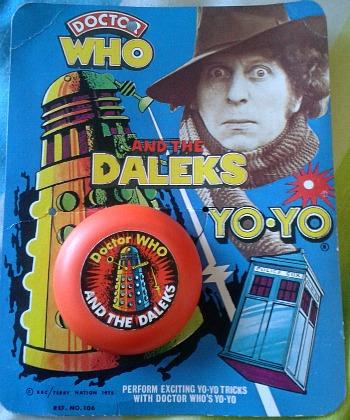 Peter Davison signed-up to replace Tom Baker in 1981, and played the role for just three years (he was scared of being typecast) between 21st March 1981 and 16th March 1984. At the age of 29, he was the youngest Doctor so far, and he remained the youngest until Matt Smith took on the role in 2009.
Despite his boyish looks, Davison was a pretty safe bet for the BBC. He was already well-known to the British public after appearing as Tristan in the hit BBC series All Creatures Great and Small.
His Edwardian cricketer costume was a decent choice and was in-line with the eccentricity of the character. The fifth Doctor's companions included Adric, Nyssa and Tegan.
Referring to the Jodie Whittaker's role as the first female Doctor, Davison controversially stated in July 2017 that while she is a "terrific actress", this is also "a loss of a role model for boys".
I have to admit that I never really warmed to Davison's fifth Doctor, and his youthful appearance and the sluggish stories didn't help matters. He is my least favourite of the classic Doctors. Nonetheless, I would still chose him over the irritating 13th Doctor played by Jodie Whittaker. 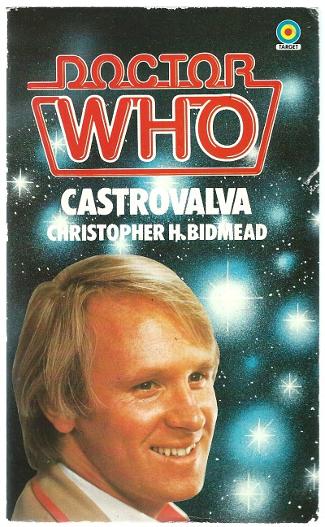 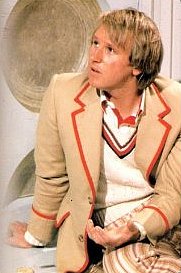 Colin Baker was the sixth incarnation of the Doctor and played the role between 1984 and 1986. I really liked his portrayal of the Doctor, but he was let down by weak scripts and that ghastly outfit which looked like it had been borrowed from one of Billy Smart's circus clowns.

Most disappointing for me was the serial Revelation of the Daleks, and I found the DJ played by Alexei Sayle incredibly irritating and ridiculous. I'm all for a little humour, but this was a step too far for me!

Baker appeared on ITV1's reality TV show I'm A Celebrity Get Me Out Of Here during November 2012.

The lame new version of the theme music helped to put the final nail in the coffin for Colin Baker's much criticised role as the timelord. This was the 13th theme tune overall.

Colin Baker as the multi-coloured Sixth Doctor during the eighties

The seventh incarnation of the Doctor (in 1987) was Sylvester McCoy and he made his first appearance in the serial Time and the Rani in series 24. Interestingly, no BBC TV annuals were published during his time as the Doctor. 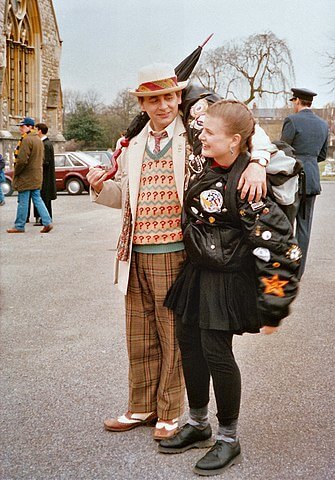 McCoy with Sophie Aldred (Ace) during filming of one of my favourite episodes Remembrance of the Daleks in 1988. This was a fast-paced serial from the 25th series and featured a good deal of Dalek action. Although a little wobbly, the daleks looked pretty impressive, and McCoy's Doctor had become a lot darker compared to his debut in the 24th series. The story featured an unusual mix of 1960s visuals and 80s background music and computer effects. Ace walking into a 60s cafe carrying a ghettoblaster, while rock and roll music played on the jukebox was certainly interesting.
McCoy certainly became my second favourite of the classic Doctors, with only Tom Baker bettering him. It's a shame the series was cancelled for 16 years, just as he was getting into his stride.
The seventh Doctor's outfit was certainly an improvement of the sixth Doctor's putrid multi-coloured jacket, although I don't like the plaid trousers, which, I guess, matched his Scottish accent.
70s and 80s Doctor Who Annuals 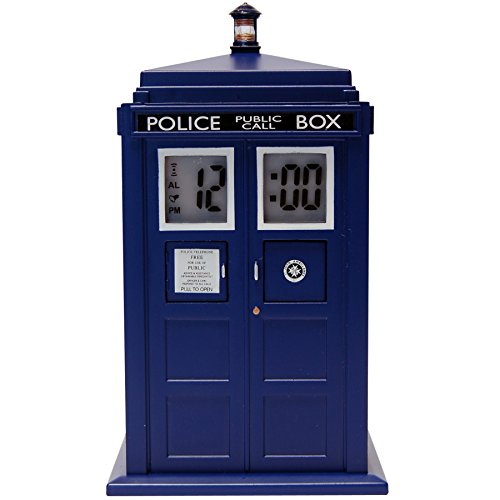