U2 "THE UNFORGETTABLE FIRE" (song)

"The Unforgettable Fire" was released as the second single from the album of the same name, entering the charts at No.8 on April 28th 1985, and making it the second-highest new entry behind Paul Hardcastle's "19". The song became the band's second consecutive top 10 hit in the UK. The single reached No.6 the following week (5th May), before falling back to No.12 on 12th May.

The single topped the charts in U2's home country of Ireland, and also reached No.3 in New Zealand.
The B-side of the 7 inch vinyl featured "A Sort of Homecoming", which was recorded live at Wembley Arena in London on Nov 15th 1984. A shaped picture disc was also released.
The lyrics were penned by frontman Bono, and were inspired by an art exhibition that Bono viewed at The Peace Museum in Chicago, U.S., which featured victims of the Nagasaki and Hiroshima atomic bombs.
Production was by Brian Eno and Daniel Lanois, who helped create the ambient and orchestrated sound, which was very different to the rock sound on their previous album War.
The UK 12 inch vinyl (Island Records 12 IS 220) featured five tracks. The A-side included "The Three Sunrises (3:52), and "The Unforgettable Fire" (4:56), both of which were produced by Eno and Lanois. The B-side featured "A Sort of Homecoming" (4:06) (produced by Tony Visconti), "Love Comes Tumbling" (4:45) (produced by U2 themselves), and "Bass Trap" (5:17) (produced by Eno and Lanois).

The video alternates between imagery of a city scape at night and the band walking through a snowy landscape. We also see a carousel which relates to the lyrics "Carnival,the wheels fly and the colours spin". There really is not a lot else going on here, and it's one of those mediocre arty 80s videos that lacks a storyline, and unlike the song's title, is pretty forgettable!
The lead single from The Unforgettable Fire album "Pride (In The Name of Love)" reached No.3 in the UK, and became the first of five consecutive No.1's on Ireland.

Lyrics for The Unforgettable Fire 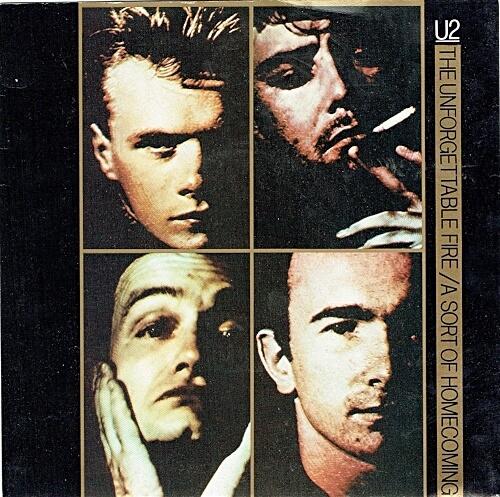 Where The Streets Have No Name