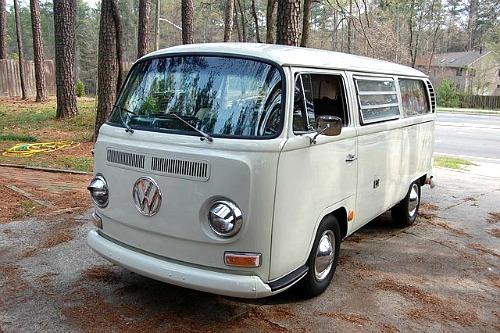 This page is dedicated to the original VW Type 2, the most recognised and best-loved panel van on the entire planet. There are many variants, and depending on the body type, the Type 2 can be called the Kombi, Microbus, Transporter, Samba Bus, Pick-up Truck or Panel Van.
Here in the UK we often refer to the Type 2 as a camper van, in the U.S. they call it a bus. Whatever you want to call it, you will find a huge selection of pictures featuring the original T1 (split screen) and T2 models.
The Type 2 was initially just a transporter van, but quickly became a symbol of peace, freedom and fun. The various models have gained affectionate nicknames over the years, such as the breadloaf, bay camper and splitty. What really set the VW apart from other transporter vans was the rear, air-cooled engine and its vertical front, although other vehicle manufacturers would soon copy the idea during the 1960s. 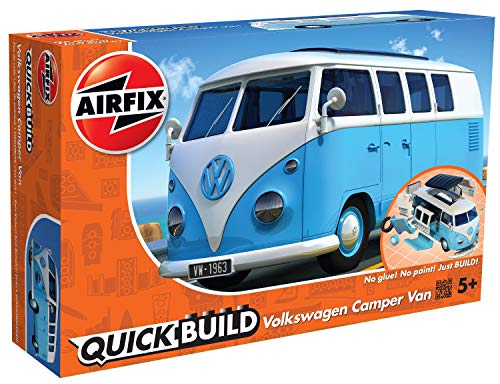 Westfalia interior of a Type 2. Photo by ArronX (http://www.flickr.com/photos/mugland/155575548/) [CC BY 2.0], via Wikimedia Commons
In the early days, people started to modify the interiors of their vans so they could enjoy weekend camping trips in comfort. They would add extra seats, beds and even sinks! Companies such as Westfalia and Danbury saw a gap in the market, and offered their services to build professional quality interiors, some of which featured extra windows and a push-up roof. The Type 2 had now become a luxurious camper van for many.

Type 2 Splitty with Westfalia modification. Photo by CZmarlin — Christopher Ziemnowicz, releases all rights but a photo credit would be appreciated if this image is used anywhere other than Wikipedia. Please leave a note at Wikipedia here. Thank you! (Own work) [Public domain], via Wikimedia Commons
With its distinctive split screen, the original T1 remains the ultimate choice for most enthusiasts, and was originally built between 1950 and 1967. For the T2, the distinctive split front windshield disappeared, and the vehicle became heavier, although slightly larger than its predecessor. These models were built between 1967 and 1969.
The main competitors to the Type 2 in the United States during the 1960s were the Dodge A100, Ford Econoline and the Chevrolet Corvair 95 Corvan.
All of the pictures on this page are either in the public domain (completely free to share) or Creative Commons - please respect the licenses for the Creative Commons images which usually require you to attribute the author and link back to the source. 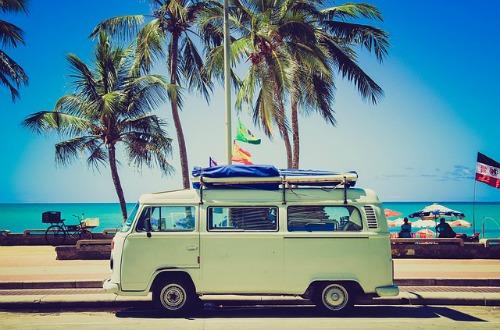 Gorgeous public domain photo of a camper van at the beach 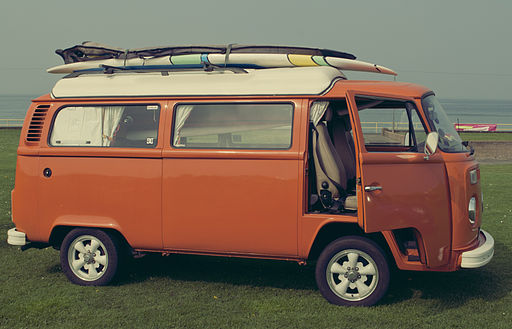 By john.purvis (VW Camper Van) [CC BY 2.0], via Wikimedia Commons

The Type 2 is perfect for taking your friends surfing at the weekends.

I adore the deep and rich blue colour which contrasts well against the white - cool van! 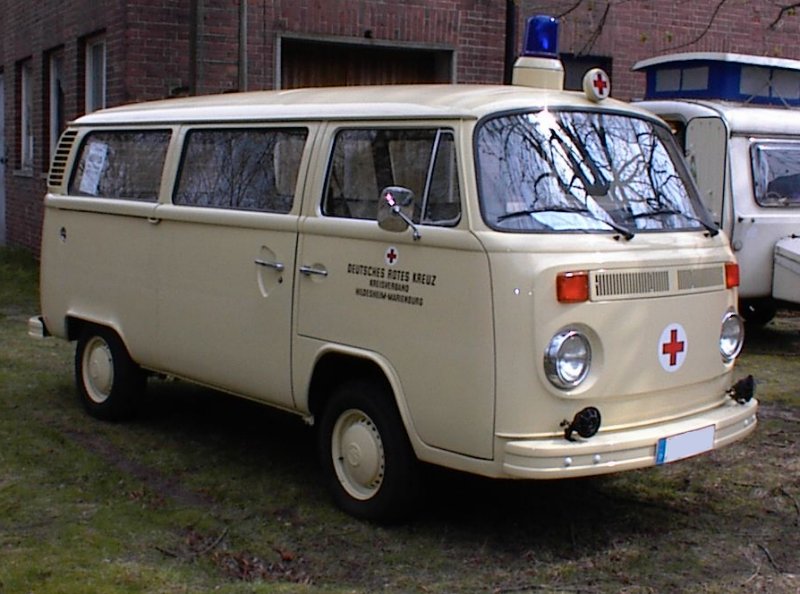 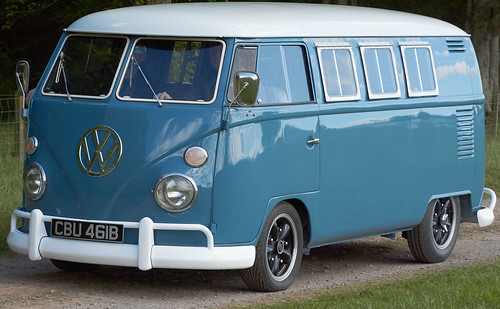 A lovely capture of a blue Type 2 - public domain image from Flickr. 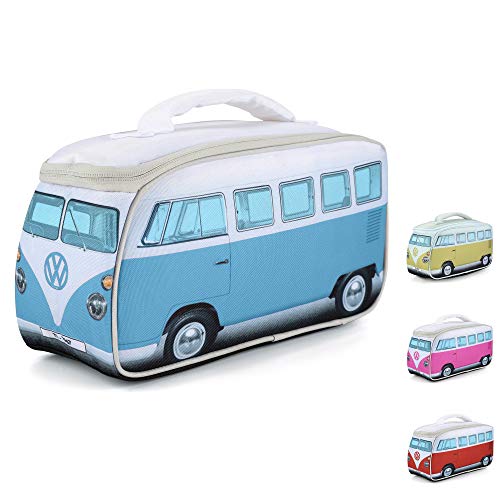 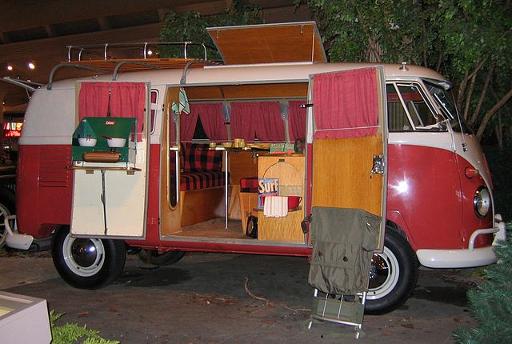 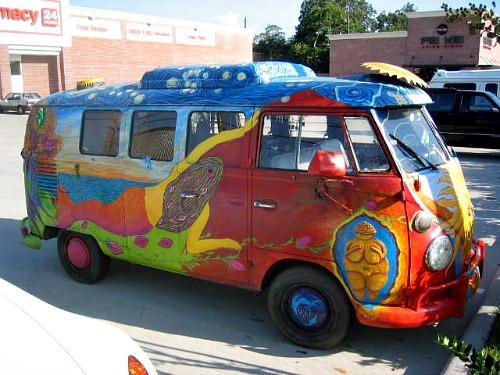 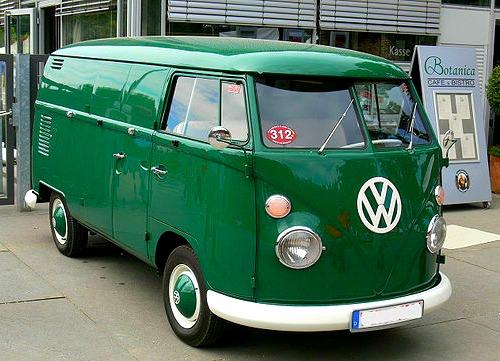 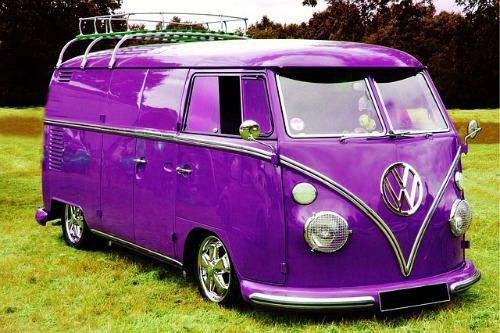 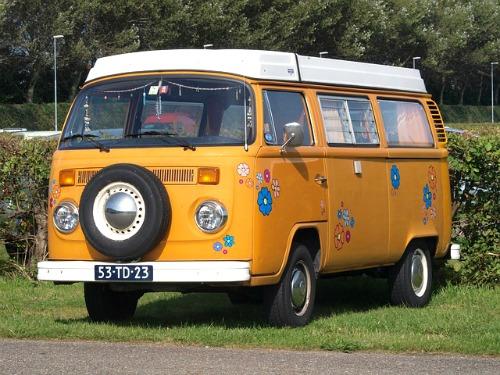 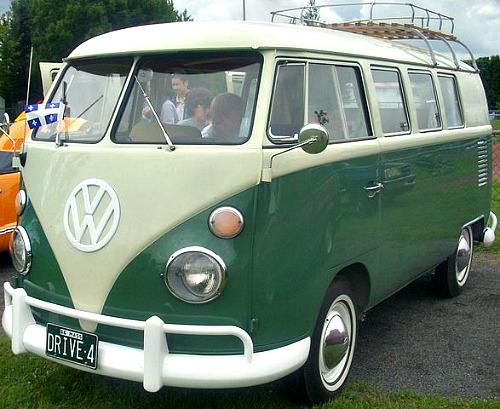 This is a public domain photo which we enhanced to improve the contrast. 1966 Kombi Bus pictured at St. Jean Baptiste Classic Car Show in Quebec, Canada. 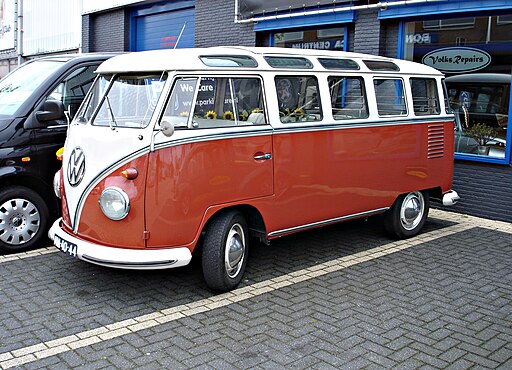 The most luxurious version of the split-screen (T1) models was the Samba, which was also amed the Sunrood Deluxe in the U.S. The first models were built in 1951. The Samba featured two pivot doors, rather than sliding doors at the side. They were painted in two colours as standard, with the upper section usually being white. A decorative strip was also added to separate the two colours. 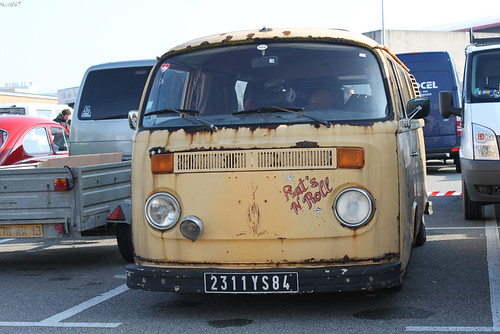 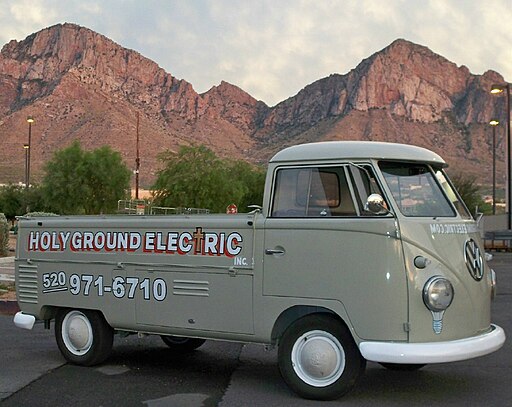 By Hge (http://holygroundelectric.com/home) [CC BY 3.0], via Wikimedia Commons

This 1961 Type 2 pick-up truck is owned by an electrician in Tuscany, Italy. 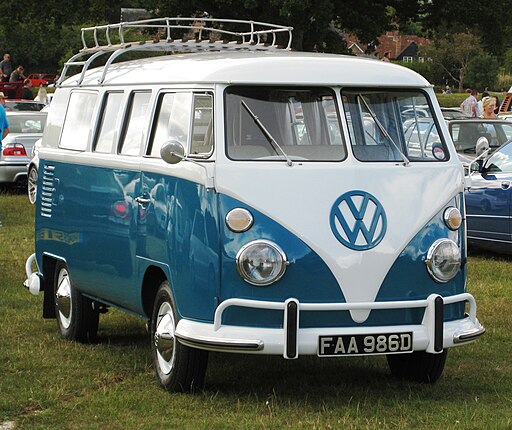 A blue and white T2 camper with classic split windsreen

By Marshall Astor from San Pedro, United States (Hippie VW 2) [CC BY-SA 2.0], via Wikimedia Commons
During the 1960s, the Type 2 became hugely popular with hippies who would adorn them with colourful artwork including flowers, psychedelic patterns and Campaign for Nuclear Disarmament (CND) peace symbols. The Type 2 remains a popular choice with hippies even today. 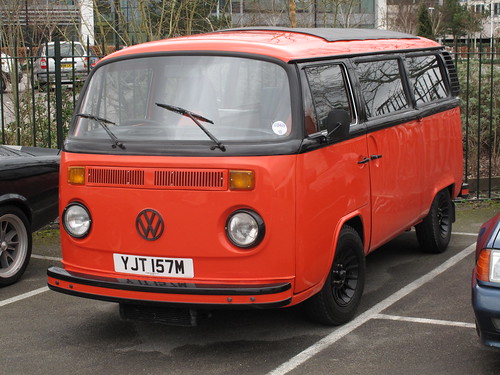 An unusual colour, and certainly distinctive! This is a Creative Commons photo from Flickr 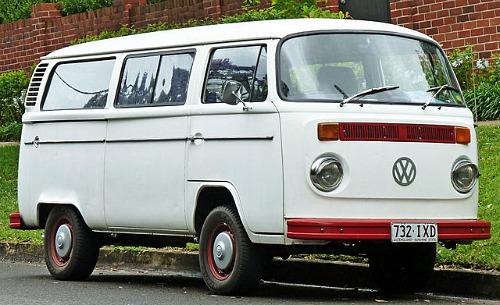 1979 VW Transporter Type 2, Silverfish Edition. This was a limited edition model which marked the final production of the T2 in Europe. 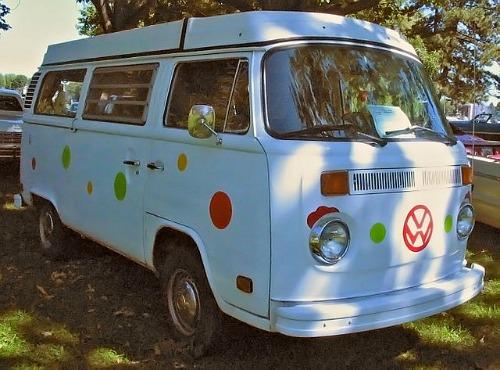 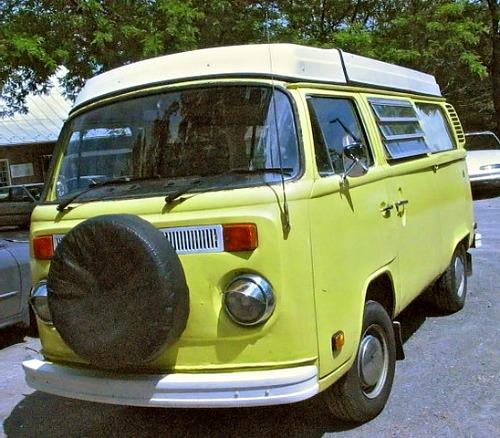 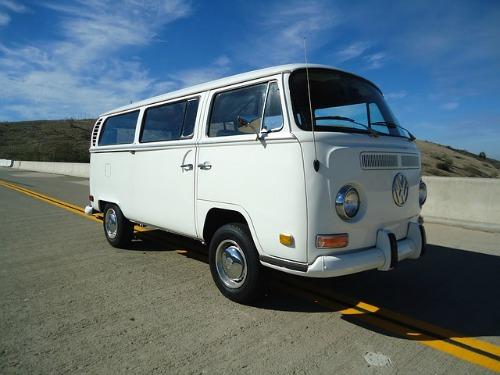 A 1974/75 Volkswagen T2 camper, shown at "Classic Cars for Father's Day" at Brodsworth Hall, near Doncaster.

By User Ermel on en.wikipedia (Photographed by Erik Meltzer in 2000.) [GFDL or CC-BY-SA-3.0], via Wikimedia Commons

1966 VW Kombi. White wheel caps of and orange curtains are not original.

This pic was taken at the Nelson and Colne College Pageant Of Power Event May 29th 2016. A really distinctive paint job - love it!

By MichaelBueker (Own work) [CC BY-SA 3.0], via Wikimedia Commons

This abandoned Volkswagen light truck type 2a (at a factory premises in Sarajevo) is in need of some TLC. 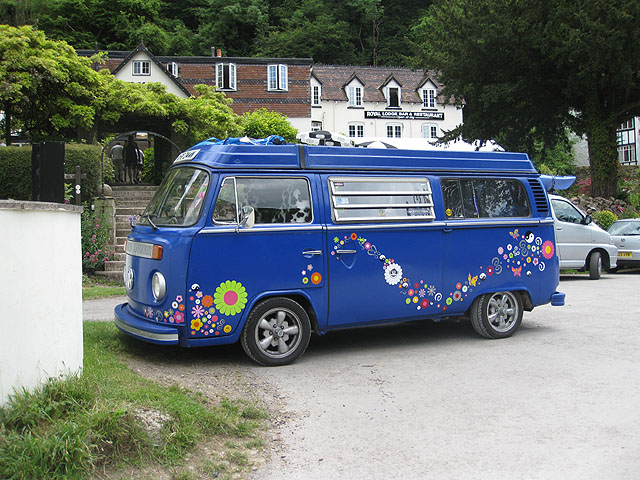 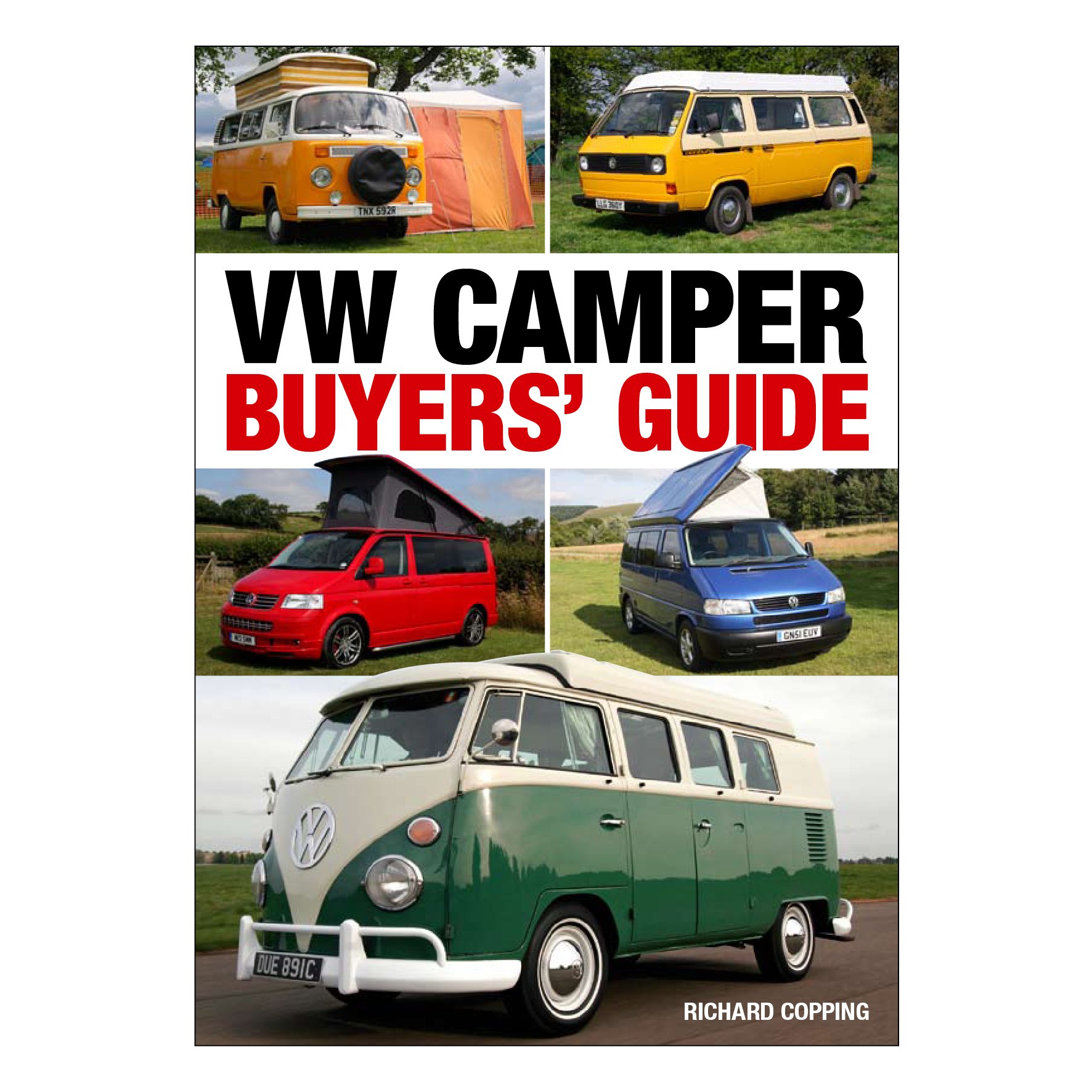 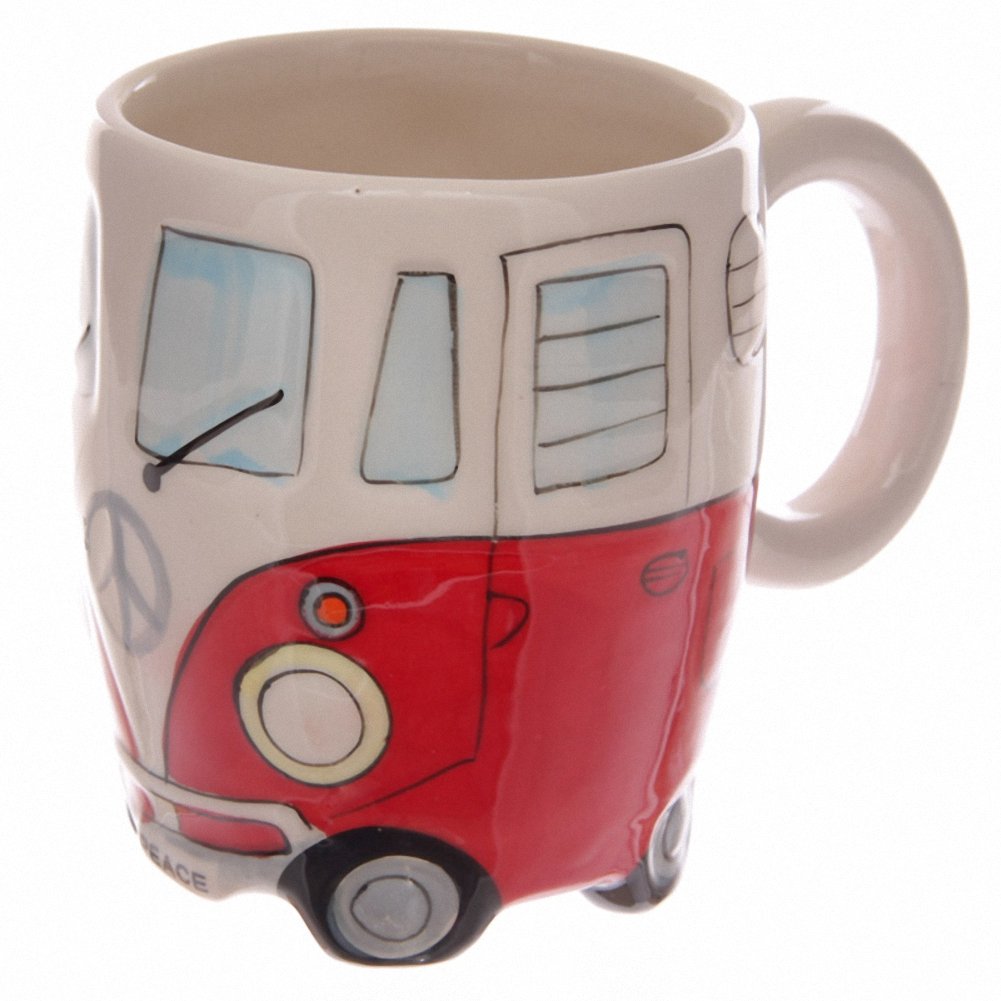 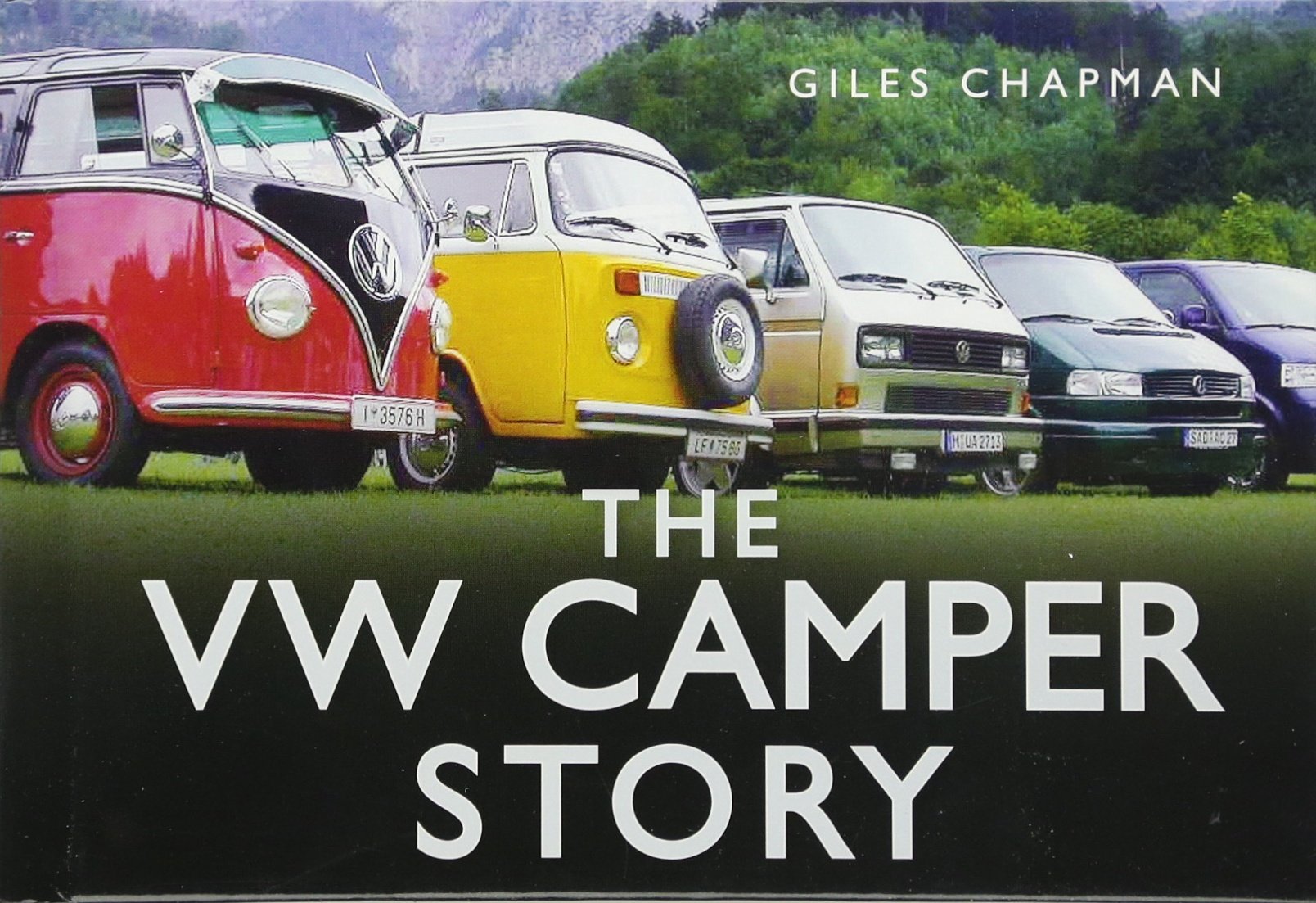