WE ARE THE CHAMPIONS (BBC1)

Now here's a children's TV series that seems to have been long forgotten, but you will certainly remember if you were a child of the 70s, 80s or even 90s. We Are The Champions had a pretty long run, and originally aired as a series from 1973 until 1987. After this, one-off specials were broadcast from 1988 until 1995.
In the video clip above, you can see the 1976 final which took part during that very long and hot summer when the UK was suffering from a record drought. It's so interesting to see the sports clothing and the hair styles from that era again. That clip takes me right back, and I certainly remember wearing a tracksuit with the stripes down the side, although mine was red and white, rather than yukky brown. 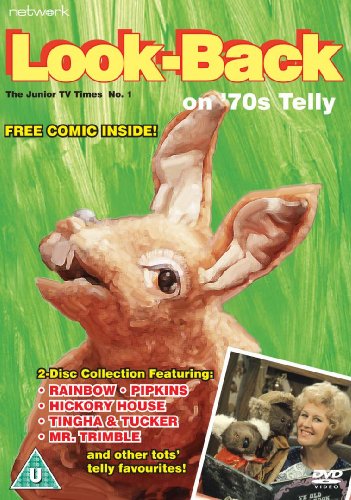 Look Back On 70's Telly DVD

The original host was the BBC sports commentator Ron Pickering. He also co-hosted Superstars with David Vine between 1973 and 1985. However, he died at his home in Digswell, Hertfordshire, on 13th February 1991, just weeks after having a heart bypass. Gary Lineker took the reigns until the final episode aired in 1995. The programme was revived for Sports Relief in 2010 and was presented by Paddy McGuinness.
The programme was based on the school sports day, an annual, British tradition that I used to dread as a child! Two competing schools would take part in field (athletics) and swimming pool events. However, the only part of the show I really remember is the ending when Ron Pickering would shout "away you go", resulting in all the kids running and diving into the swimming pool. As I've never been a massive fan of watching sport, the reason for only remembering the show's finale is probably because I was waiting for the whatever followed it - either the news or a cartoon, depending on my age at the time.

However, looking back at a TV schedule from Thursday July 12th 1984, there was no cartoon that followed;

Actually, at 16, I was too old to be watching cartoons and We Are The Champions in 1984, so I was probably waiting for Sixty Minutes!
Okay, let's go back to around the same time in 1983. Still no cartoon, it's followed by the Evening News. How about 1981? Nope, still the Evening News! There is a change, however in 1979, with a Blue Peter Special Assignment being shown. We Are The Champions was shown earlier at 16:40 during June and on a Friday instead of Thursday. On Friday 1st June it was followed by Lassie. Now there's a programme I adored, I would definitely have just switched on to watch that!
In 1977, a new series started on Thurday 7th July and this aired at 17:10 after Asterix The Gaul and before Ludwig, in the London area, at least. I certainly remember watching the Ludwig cartoons in Gloucestershire.
After checking the schedules from the 1970s and 80s, it would appear that We Are The Champions aired on a Thursday in most years during June and/or July. 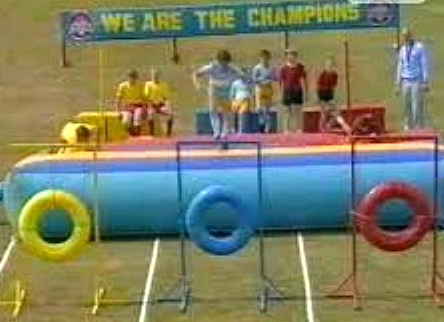 It's been very difficult finding much info on this programme, despite most people of a certain age remembering it. If anyone can add any more facts about the series, then please do add your comments below - they're always welcome.
70s Kids TV Shows