Choosing to release a romantic ballad as the lead single from an album is a always a brave move, and while "Sweet Surrender" is obviously not as upbeat as Wet Wet Wet's melodic debut single "Wishing I Was Lucky", or as instantly infectious as the follow-up "Sweet Little Mystery", Marti Pellow's charismatic performance helped this smooth slice of sophisti-pop to reach a very respectable No.6 in the UK charts, although it deserved the No.1 spot, in my opinion!
Indeed, it's hard to find such well-constructed songs these days, or a lead singer who sings every word so clearly - I have always been amazed at how Marti's strong Scottish accent completely disappears when he sings!
The single entered the chart at No.14 on 24th Sept 1989 (exactly 30 years ago to the day as I write!), making it the third highest new entry - Erasure claimed the highest new entry with "Drama". It was released as the lead single from Wet Wet Wet's second studio album Holding Back the River.
In the video, we see the Scottish quartet performing against a deep blue/purple background, with people dressed as red ninjas occasionally floating by - for whatever reason! Marti Pellow adds to the song's sophisticated feel by wearing a tuxedo and Colonel Sanders style string bow tie, and, of course, he has that trademark smile which makes every performance a joy to watch - I challenge you to watch a Wet Wet Wet video without smiling!
The single reached a peak position of No.6 on 1st October, before falling back to No.7 the following week, and spent a total of 8 weeks in the UK Top 100. The song reached No.1 in Ireland, No.7 in Australia, No.10 in New Zealand, No.24 in Austria and No.37 in Germany.
The B-side features a live version of "This Time" recorded at The Govan Town Hall in Glasgow on 15th November 1988, and includes additional guitars and backing vocals by unofficial band member Graeme Duffin. The 12 inch vinyl and CD singles feature an Extended Version of "Sweet Surrender", as well as the track "H.T.H.D.T.G.T.", which is a hidden track on the CD album with the full title "How The Hell Did They Get There".
"Sweet Surrender" was written, arranged and produced by Wet Wet Wet.
While not quite as successful as their debut album Popped In Souled Out, Holding Back the River still managed to acheive a very respectable No.2 position in the UK album charts with 2 x platinum sales. 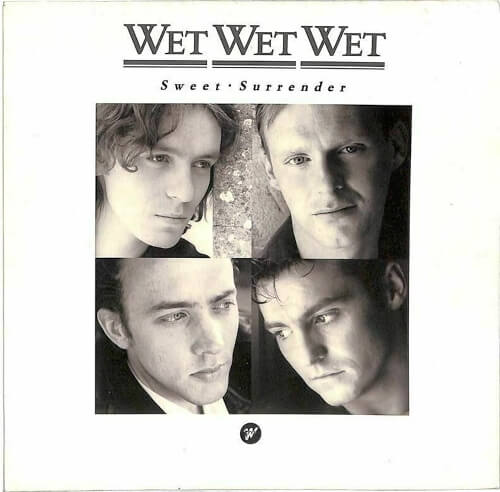