WHAM! "WAKE ME UP BEFORE YOU GO-GO"

Following a legal battle with their record label Innervision, Wham! signed up with a new label Epic Records in 1984, and returned with a new pop image and a whamtastic new single "Wake Me Up Before You Go-Go".
The song became Wham's first No.1 single in both the UK and U.S., and was released as the lead single from their second studio album Make It Big. It spent 16 weeks on the UK singles chart.
The single sold 2 million copies in the U.S., and gained a platinum certificate from the RIAA.
The B-side included an instrumental version of "Wake Me Up Before You Go-Go". The 12" also featured "A Ray of Sunshine" which was recorded when the band performed on the UK music show The Tube. 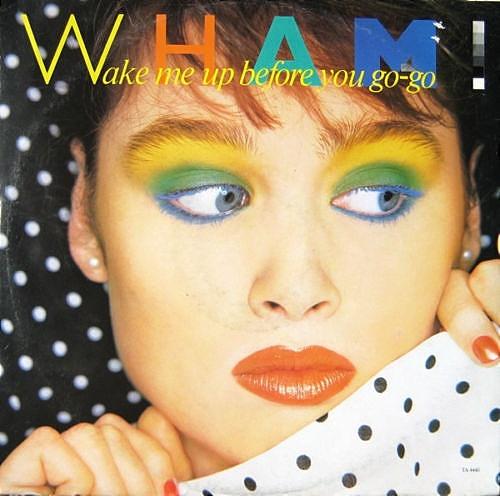 Directed by Andy Morahan, the video features an iconic 80s fashion moment, when the the band were dressed in white and wore Choose Life T-shirts designed by Katherine Hamnett. George and Andrew's tees had rolled-up sleeves. Backing singers, Pepsi and Shirlie, wore "Go-Go" T-shirts, and other dancers on stage also wore "Go Go" T-shirts. It was filmed in front of a teenage audience at Brixton Academy in South London. The video was once featured in the NME's list of "50 Worst Pop Music Videos".

Apparently, the song was inspired by a note that Andrew Ridgeley left for his parents which said "wake me up up before you go go". Ridgely had mistakingly written "up" twice, so he purposely added another "go". The drum part was supposed to be played by a real drummer during a rehearsal of a demo Michael had created, but he turned up late. So instead, they used a Linn drum machine, and decided the drum track was so great they kept it!
The song was also heavily influenced by energetic dance music from the 1950s, and the repeated "jitterbug" line refers to the popular 30s/40s dance that evolved into a popular 1950s rock and roll dance. I spent a good part of my teenage years thinking it was "doodlebug", for whatever reason! I guess I should have paid more attention to the lyrics page in Smash Hits magazine.
Some sources also suggest the lyrics were about watching someone masturbate, but whether there is any truth in this is anyone's guess! However, the lines "I don't want to miss it when you hit that high" and "Cause I'm not planning on going solo", certainly could be sexual innuendos.

The single entered the UK singles chart at No.4 on 20th May 1984, making it the highest new entry that week. It claimed the No.1 spot the following week, with Duran Duran's "The Reflex" falling to No.3. The single remained at No.1 for two weeks, before being replaced by that epic anti-cold war classic "Two Tribes" by Frankie Goes To Hollywood.
This was also the start of the band's most successful period commercially, with five number one singles between 1984 and 1986.

Lyrics for Wake Me Up Before You Go-Go 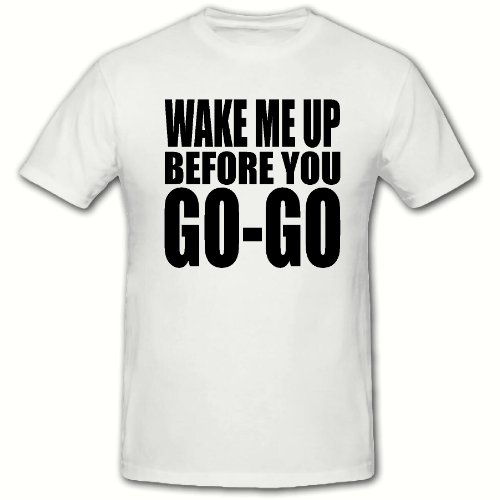 Wake Me Up Before You Go Go T-shirtBUY AT AMAZON

Wham! Make It BigBUY AT AMAZON