On this page, I'm going to take a look back at ZZ Top's hits from the 1980s. No surprise there then, this is an 80s website, after all! Thankfully, this just happened to be the rock band's most successful period for hit songs and albums, with their 1983 Eliminator album achieving a diamond sales certificate in the U.S. and Canada, and 4 x platinum in the UK. 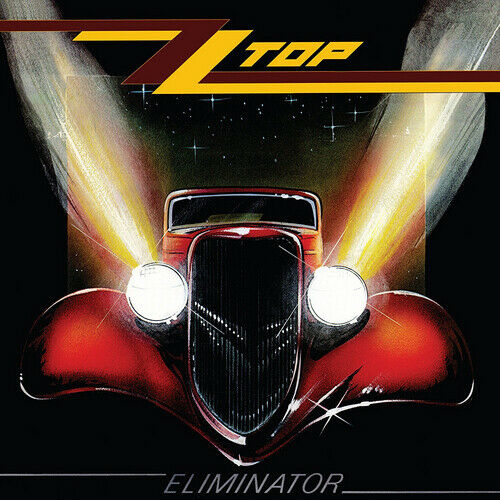 ZZ Top's eighth studio album proved to be their most commercially successful, selling around 10 million copies in the U.S. alone. The album was recorded at the Ardent Studios in Mephis, Tennessee during 1982, and released on March 23rd 1983 by Warner Bros. It was produced by Bill Ham, the band's manager.
The LP featured some of the band's best-known singles, including "Sharp Dressed Man", "Gimme All Your Lovin'", "TV Dinners" and "Legs". During the first half of the 1980s, many pop and rock acts were experimenting with synthesizers, and ZZ Top were influenced by this new wave sound. They had used synths on the 1981 album El Loco, but now wanted to feature them more heavily on Eliminator. 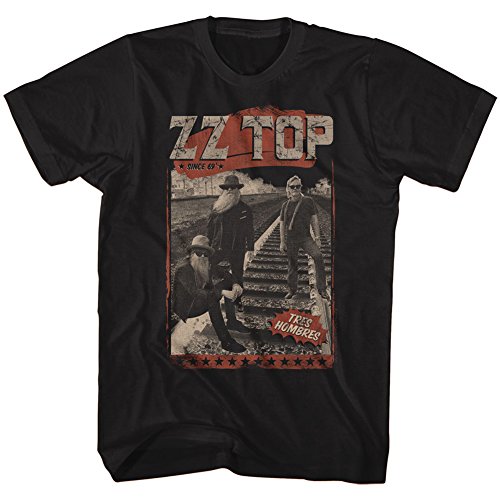 Despite this, there were a few critics who argued that the album was too safe and over-familiar, with the tracks lacking variety. However, the majority would strongly disagree with this, with the album often being included in "Greatest rock albums" lists in popular music magazines. Rolling Stone once listed the album as the 39th greatest album of the 80s.
There were several elements that combined to make this album achieve massive sales across the globe. The tracks on the album were more radio friendly with more pop bounce, for a start. Combine this with MTV's heavy rotation of the videos, which featured imagery that was very appealing to fans of rock music - dudes with beards, the classic hot rod car and the sexy women - and you were on to a sure-fire winner.
This was an album that sat perfectly between the band's blues rock roots and the more commercial sound of later albums. The blues rock grooves still dominate, but with sequenced beats tightening up the ZZ Top sound, taking the band's sound to a wider audience. Of course, some fans hate the sequencing, but for me this is the perfect dance rock album - a true classic - and there's not a bad track on the album. Therefore, I just have to rate it 10/10. 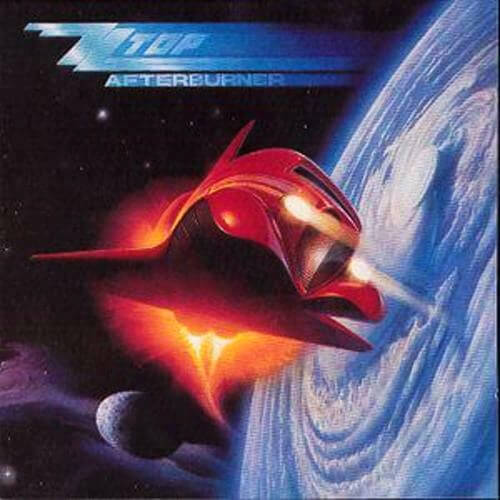 It was always going to be an impossible task to create another album that would duplicate the success of Eliminator. Nonetheless, ZZ Top gave it a damn good go. The band wisely stuck to the tried and tested formula that had made Eliminator so successful, although venturing a little more into new territory with extra synths, but not reverting back to their more raw 70s blues sound. Many would argue that the album should have been titled "Eliminator Part 2".
The album's opening track, "Rough Boy", is actually one of my least favourite tracks on the album. It's a rather cheesy, 80s rock ballad that is probably the worst opening to a ZZ Top album ever! It's not a patch on Eliminator's ballad, "I Need You Tonight". Thankfully, things improve somewhat with "Sleeping Bag", an electro rock hit that reached #8 in the U.S. The song also topped the U.S. Mainstream Rock Tracks Chart, making this the band's most successful single.
The highlights for me are the tracks "Can't Stop Rockin'", "I Woke Up with Wood", "Delirious" and "Planet of Women" which are more guitar driven. Personally, I find the production of the tracks such as "Velcro Fly" and "Stages" a little too synth driven, with the movie track style synth stabs making the band sound uncomfortably like Huey Lewis & The News.
However, synths can sometimes add a little something to a rock track, and the synth arpeggio on the album's final track "I Got The Message", gives it an appealing electro rock sound, kind of similar to "Sleeping Bag".
Sadly, Afterburner is just too synthetic and the blues rock takes too much of a back seat at times, making it less appealing than Eliminator. I guess, this album was seen as the way forward at the time, with the 80s production techniques very much in evidence. It's not a disaster, though, and having thoroughly enjoyed six of the ten tracks on offer, my overall rating would be 6/10. 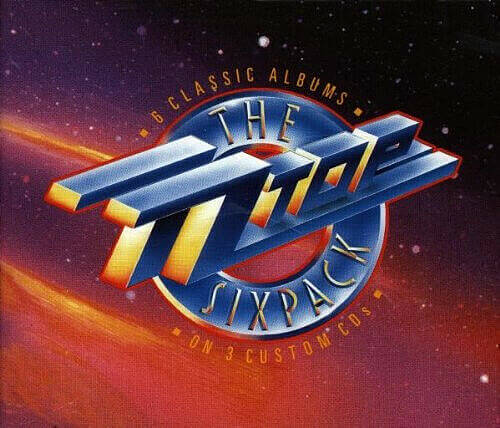 "THE STUDIO TINKERING MAKES THIS A DISASTER!"

Six Pack was a 1987 compilation album featuring the first five albums. It did not chart in either the U.S. or UK. After the success of Eliminator and Afterburner, the band tried to eminate their success by remixing all of the tracks from their first five albums, by adding similar percussion and guitar effects that had featured on the two aforementioned albums.
Many fans and critics were displeased with the result, claiming that the raw blues sound should have been left as it was. It proved to be a disaster for the band, with the compilation only charting in Australia at #99 - oh dear!
Stephen Thomas from AllMusic wrote "If Six Pack just delivered the original albums, it'd be a good investment, but the studio tinkering makes this a disaster." 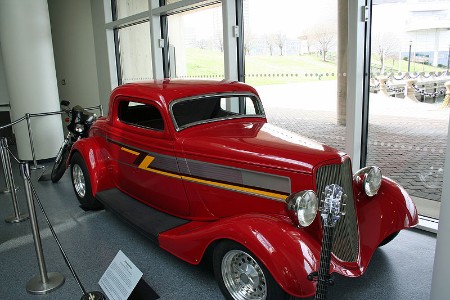 The red 1933 Ford 3-window coupe hot rod, "The Eliminator", was customized by Don Thelen at Paramount. The car was featured in a video trilogy from the album Eliminator, consisting of "Sharp Dressed Man", "Gimme All Your Lovin,'" and "Legs."

Chart positions are for the U.S. and UK respectively.

Lifted from their 1979 album Deguello, this song is one of the band's best known tracks. Apparently, the Marshall Major amp used during the recording had a blown tube, which, along with the use of a Maestro ring modulator, helped create a distinct tone on the song.

This blues rock ballad was released as the lead single from the 1981 album El Loco, peaking at #77 in the U.S.

Tube Snake Boogie (featuring La Grange as the B-side) as released as the second single from El Loco, reaching #103 in the U.S. Billboard Hot 100, and also #4 on the Mainstream Rock Charts. 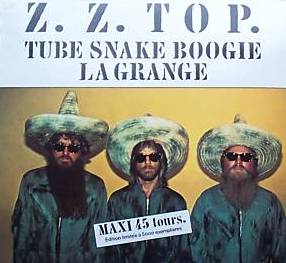 By Source, Fair use, Link

The video for Sharp Dressed Man continues the "male fantasy come to life" of the Gimme All Your Lovin' video released earlier in 1983. This was the second hit single from the Eliminator album (third single in the U.S.) and reached No.22 in the singles chart.

The song features in the opening titles to the US reality TV show Duck Dynasty which has aired in the UK on Freeview in recent years.

During the 80s, ZZ Top provided a consistent sound of rockin' blues with most of the songs being written by the trio themselves - Gibbons, Hill and Beard. Dusty Hill once described himself as "immune to fashion". 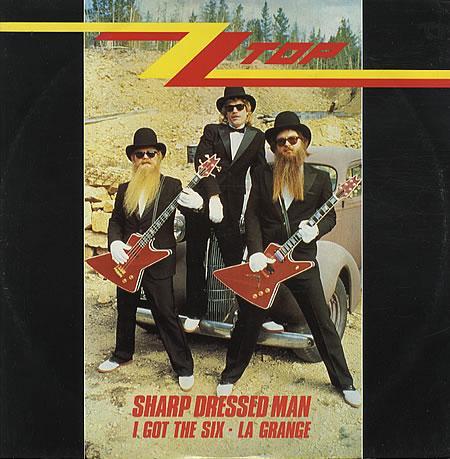 TV Dinners was released as the final single from Eliminator in 1983, reaching #67 in the UK, but failing to chart in the U.S. The song is lyrically a light-hearted affair, amusingly referring to the dire oven-ready meals which were hugely popular at the time - this was a time when microwaves were just becoming popular.

The single was released on 12" and cassette, with the B-side featuring Cheap Sunglasses. The video features a mix of deliberately dodgy, 1950s monster movie style claymation and live action sequences. The keen eyed amongst you will have spotted that Dusty Hill also plays a 1960s Vox Continental organ. This is certainly one of the band's most entertaining videos.

My favourite line from the song is "I even like the chicken if the sauce is not too blue." 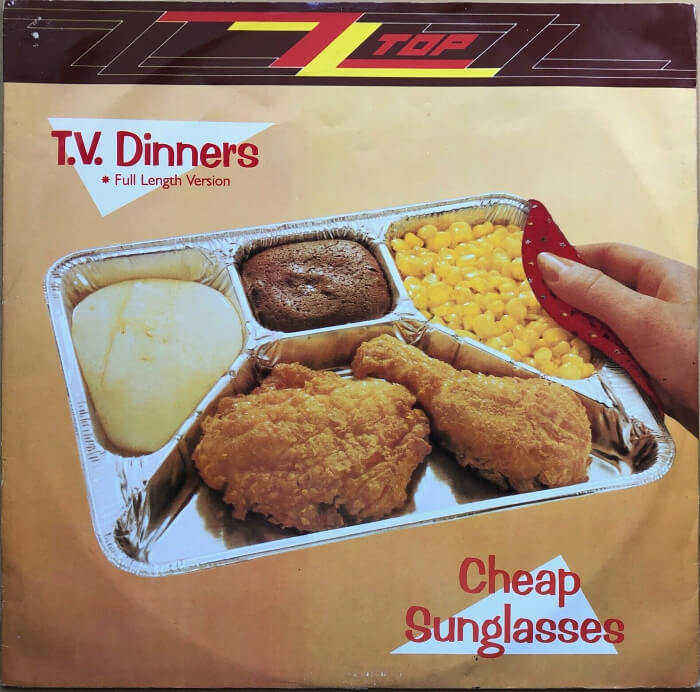 The title of this track (and the photo on the single sleeve) tells you all you need to know about the subject matter! Legs was the third hit single from the Eliminator album for the 80s rock band, reaching #16 in the UK singles chart and #8 in the U.S. A remixed dance version also reached #13 in the U.S. dance charts.

The video won an MTV award for the Best Group Video. 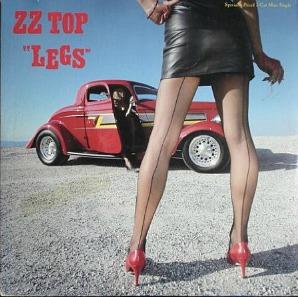 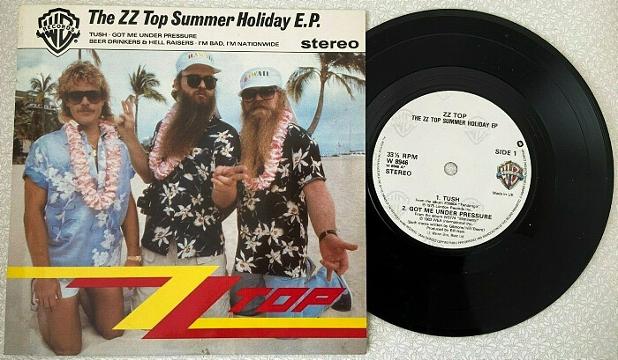 Stages was the second single from the band's ninth album Afterburner and reached #21 in the US and #43 here in the UK. The B-side on the 7" vinyl was entitled Can't Stop Rockin'. However, a different song featured on the 12" version called Hi Fi Mama, along with an extended version of Stages. 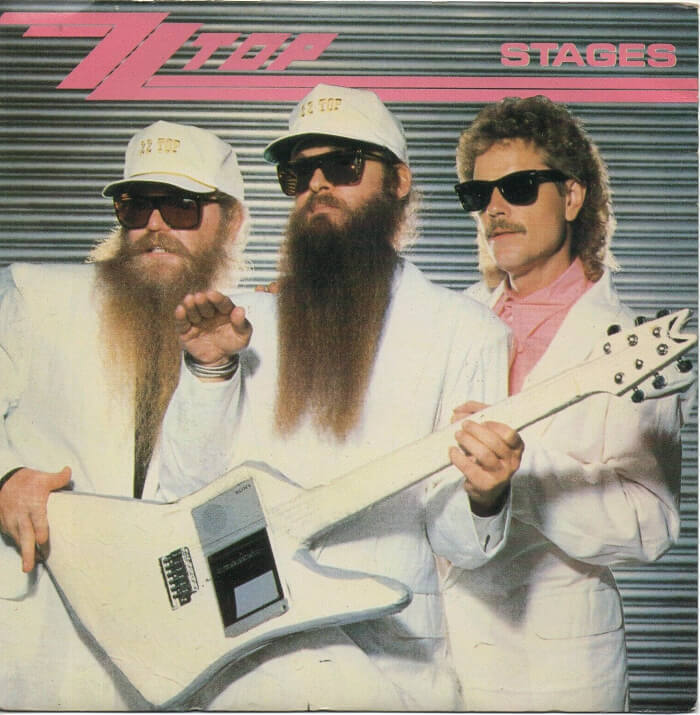 This very 80s power ballad reached #22 in the U.S. Billboard Hot 100 and #23 in the UK singles chart. It was the opener to the band's eight studio album Afterburner. In the video, we see the Eliminator vehicle as a car/shuttle hybrid visiting a car wash in space. 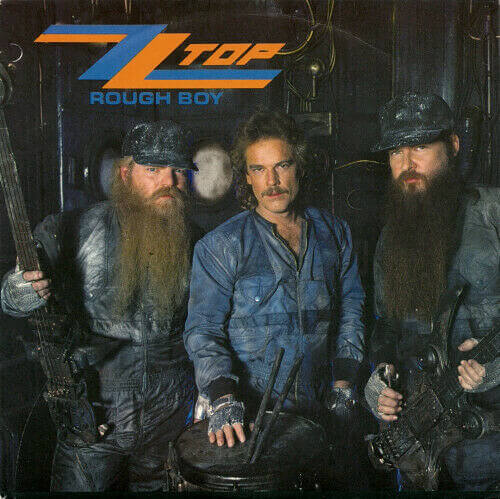 This cover of Elvis Presley's hit single was released to promote ZZ Top's Greatest Hits album which features many of their great eighties hits and reached No.10 in the UK singles chart. 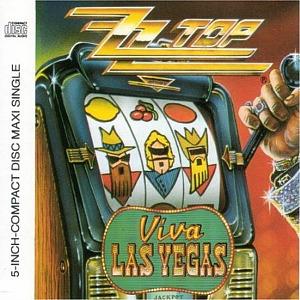 ZZ Top's cover of Viva Las Vegas was released as a single in 1992 to promote the album ZZ Top's Greatest Hits. It was one of two new tracks on the album. 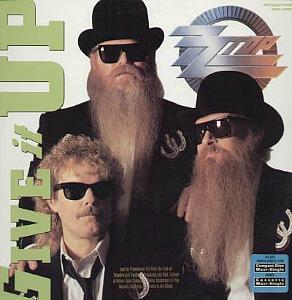 Chart positions shown are for the U.S. and UK respectively. 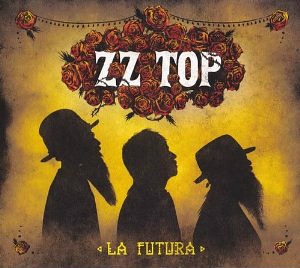 Despite the band members Billy Gibbons, Dusty Hill and Frank Beard reaching their 70s, ZZ Top were still been performing and touring in recent years. In 2019, Dusty Hill stated announced that a sixteenth studio album might be on the cards.
However, in July 2021, Hill was forced to pull out of a U.S. tour due to a hip injury. Just five days later, on July 28th, it was announced that Hill had sadly passed away at his Houston home, aged 72. R.I.P.
Full List of 80s Music Video Pages
80s One Hit Wonders 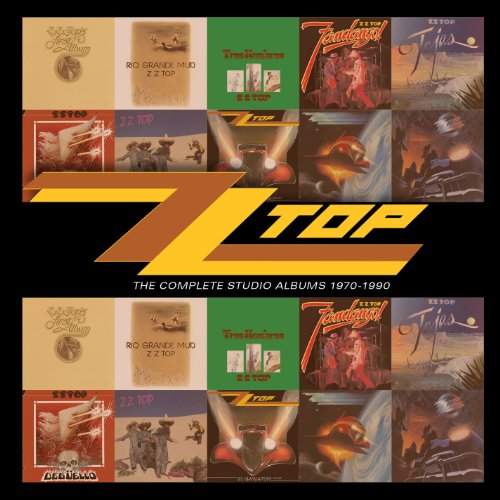